Tell your reps that Trump is not above the law: He must accept the Supreme Court’s ruling on the census question

When the Supreme Court ruled that the 2020 census must not include a question about citizenship status, most thought the battle was won. It should not surprise anyone that the President feels otherwise; after all, when has he ever admitted defeat or respected the rule of law? Our own U.S. Rep Chip Roy is enabling Trump’s unconstitutional gambit by spelling out ways for Trump to issue an executive order that would reinstate the question of citizenship status. (For an explainer on the whole debacle, go here.)

There are a couple of actions to take. (Hat tip, once again, to Celeste Pewter.)

Read: 5 things you can do now to support an accurate census

Read more on Donald’s masturbatory celebration of self

Register voters near you!

Register2Vote is a non-partisan, non-profit organization dedicated to accelerating voter registration and mobilization. Using this map from Register2Vote.org, you can identify unregistered voters, chip in a little money, and have voter registration forms mailed to them. Once the applications come back, you’ll be able to track progress. Amazing! 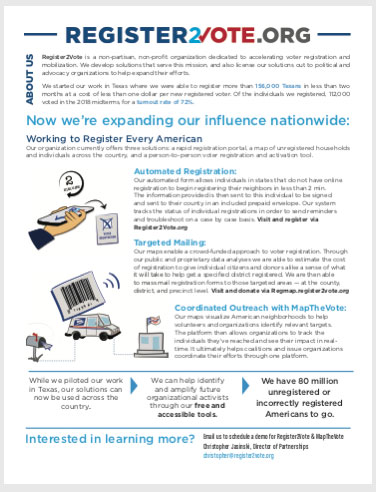 We have also updated our 2020 Elections Page. There are lots of new candidates—including new Senate candidates and 11 (ELEVEN) people running in TX31.

The committee on Homeland Security & Public Safety will meet jointly with the committee on International Relations and Economic Development to hear invited testimony on issues related to the increase in asylum-seeking migrant families at the Texas-Mexico border.

The third installment in our series of readings from the Mueller Report, at North Door Austin. Doors open at 5 p.m.

Activist of the Week: Madi Distefano

ICYMI: Madi Distefano got sick of waiting around for somebody to take action to help migrant kids in cages—so she caged herself for 36 hrs at the Texas Capitol. We interviewed her last night at hour 33. @fams2gether @indivisibleATX #TrumpHasKidsInCages #CloseTheCamps pic.twitter.com/OOs9HdxiKv