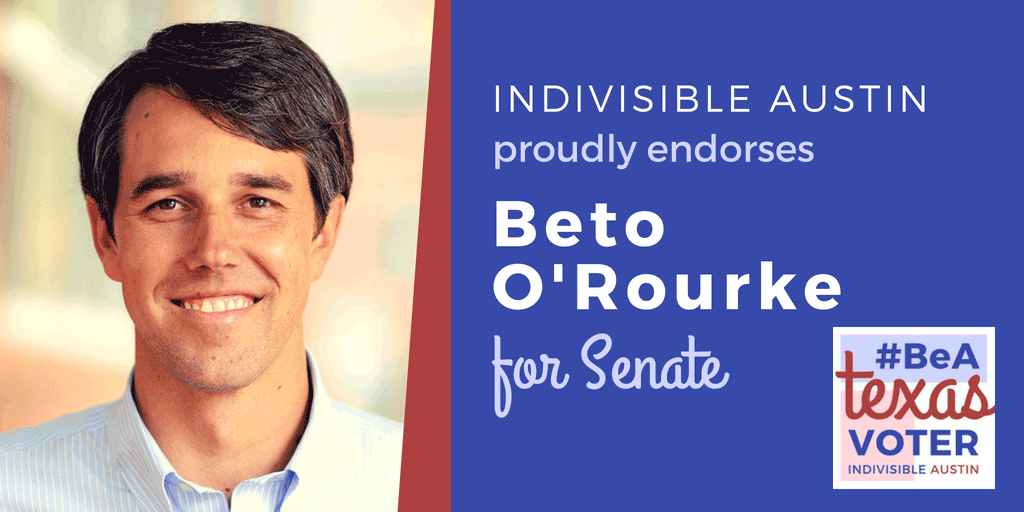 Indivisible Austin is proud to endorse Beto O’Rourke for U.S. Senate. We have watched O’Rourke’s campaign closely over the last several months, and we have been excited to see him criss-cross the state to meet with Texans at hundreds of public meetings. In sharp contrast to the incumbent, who seems to spend more time in Iowa than in Texas, O’Rourke has met with thousands of Texans this August alone, welcoming questions from people of all political stripes, and rejecting PAC and large donations.

It’s 70 days to Election Day—and only 55 days until Early Voting begins. Here are some ways to continue building the Blue Wave:

“Given the possibility of criminal wrongdoing by the President, doubts that Judge Kavanaugh believes a president can even be investigated, and the unprecedented lack of transparency regarding this nominee’s record, we should not move forward with hearings.”

The level of corruption in this presidency is mindblowing, yet, so far, GOP enablers like John Cornyn and Ted Cruz continue riding the Trump Train. Both of our Senators are members of the Judiciary Committee on which their Democratic colleagues took a stand. Call and tell them that corruption will not be tolerated, and that they will be on the wrong side of history if they allow Kavanaugh’s nomination to proceed.

(And thank you, Rep. Lloyd Doggett, for co-sponsoring)

“The Violence Against Women Act — which directs the national response to crimes of domestic violence, sexual assault, dating violence and stalking — will expire at the end of September if lawmakers don’t act fast.”

The VAWA has been reauthorized three times since 1994 with bipartisan support. The bill currently has 126 Democratic cosponsors and zero Republican. It’s time for GOP reps like Mike McCaul, Bill Flores, Lamar Smith, Roger Williams, and John Carter to get onboard with this popular legislation that protects half of their constituents.

We're at Texas' Biggest Postcard Party today at the Capitol! A couple hundred folks are busy writing cards to 90K(!) voters, and hearing from speakers about the threat of Kavanaugh to our collective rights. @marchontexas #StopKavanagh pic.twitter.com/TrxIxy5DU4

It’s still that uncomfortable-verging-on-intolerable period of Texas summer, so we fully relate to this baby condor:

Indivisible Austin is dedicated to making sure that our voices are heard here in Texas and in Washington, D.C. during the midterm elections. Soon we’ll be organizing groups of volunteers to canvas neighborhoods. We’ll be educating voters and working to boost turn out.

We can’t just send volunteers out alone with no preparations or supplies, though. We need clipboards, printed leave-behind material, ID tags, water and dozens of other things that you wouldn’t immediately think of, in order to do it right.

All of these things cost money, and that means we need you. Make a gift to Indivisible Austin today.  Add your drops to this year’s wave. Heck, add your buckets if you can.