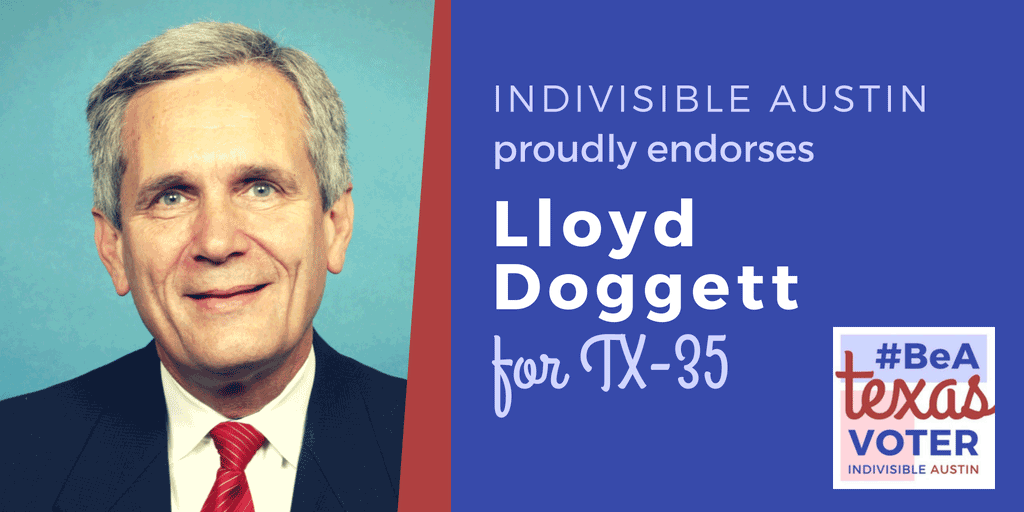 Indivisible Austin is proud to endorse Rep. Lloyd Doggett (TX-35) for reelection. When Indivisible Austin started, and we began asking people which congressional district they lived in, the majority said “Doggett’s!” because at some point that was probably true—and he represents the values of our city much more than any other Austin-area Congressperson.

Thanks to gerrymandering by the Texas House, Rep. Doggett no longer represents most folks in Austin. But he has consistently shown an openness and willingness to engage with and represent all Austinites, regardless of which congressional district they call home. He is the only Austin-area member of Congress to hold public town halls open to all.

Rep. Doggett is the only reliable champion the Austin area has in its congressional delegation. He’s an active and vocal ally on every important issue. Rep. Doggett has been a steadfast supporter of the Affordable Care Act and thoroughly resisted all repeal efforts. Well before Trump was elected, Rep. Doggett founded the Affordable Prescription Drug Task Force and has consistently fought to advance real solutions to lower drug prices and address one of the biggest drivers of America’s healthcare crisis—in contrast to the president, who consistently lies to voters about his dedication to reducing drug prices.

As the ranking member of the Tax Policy Subcommittee of Ways and Means, Rep. Doggett was by our side fighting the Tax Cuts and Jobs Act (aka the GOP Tax Scam) and he continues to call attention to the abject failures of that bill to make a positive difference in the lives of the vast majority of taxpayers. Rep. Doggett is a co-sponsor of the DREAM Act, and in March of this year voted against the House budget in part because it failed to offer any protection for Dreamers, while boosting funds for the so-called border wall.

We are pleased to endorse Rep. Doggett as a public servant who shares Indivisible Austin’s values: defending democracy, opposing authoritarianism, and protecting those most under attack by the immoral policies of the Trump administration.