NOTE: The impeachment rally at Austin City Hall is planned to take place the day before the House floor vote to pass articles of impeachment for Donald Trump. That vote is not yet scheduled—but you can still sign up! 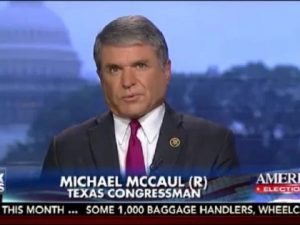 Mina Chang landed a plum State Department gig thanks to an embellished resume and a fake Time magazine cover—and a letter of recommendation from Rep. Michael McCaul.

“I would like to give my strongest recommendation of Ms. Mina Chang…to assume a leadership position within either the Bureau of Conflict and Stabilization Operations or the Bureau of Counterterrorism of the U.S. Department of State.”

Ready to boot McCaul? Support the candidates running against him.

The impeachment rally at Austin City Hall is planned to take place the evening before the House floor vote to pass articles of impeachment for Donald Trump. That vote is not yet scheduled.

DEFIANT LIVES is a triumphant film that traces the origins of the world-wide disability rights movement.

It tells the stories of the individuals who bravely put their lives on the line to create a better world where everyone is valued and can participate.

Featuring interviews and rarely seen archival footage, the film reveals how these activists fought to live outside of institutions, challenged the stigmas and negative image of disability portrayed by the media, demanded access to public transportation, and battled to reframe disability rights as a social responsibility relevant to us all.

Join Statewide Indivisibles and Indivisible Houston right here in our hometown for a Senate Candidate Forum featuring Democratic primary candidates for Senate, moderated by Patrick Svitek of the Texas Tribune.

signs that you have maximum chill: you dance as you’re waiting for someone to come to the door and you giggle when a wild animal jumps on your head pic.twitter.com/OyTwg0erFi