NOTE: The impeachment rally at Austin City Hall is planned to take place the evening before the House floor vote to pass articles of impeachment for Donald Trump. That vote is not yet scheduled—but you can still sign up!

Action of the Week: Protesters tell Trump to GTFO out of Austin 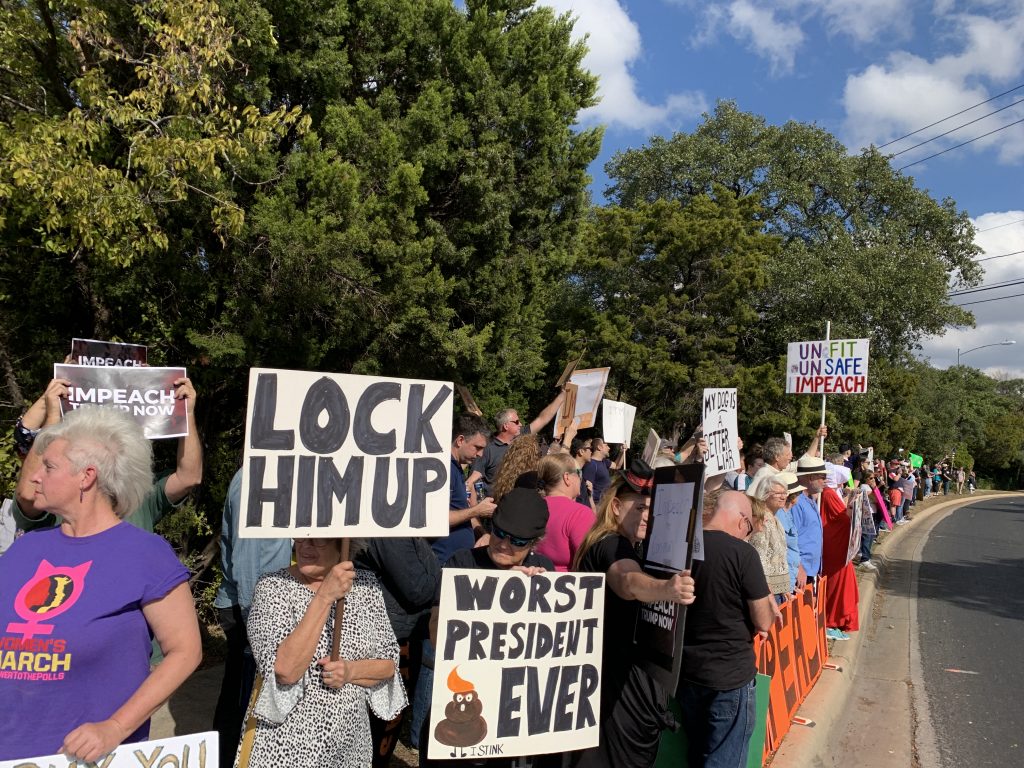 On Wednesday, November 20, protestors from Progress Texas, Texas Sierra Club, Why Are You Marching Texas?, TX21 Indivisible, TX10Indivisible, Indivisible Rosedale Huddle, Megaphone Texas, and Indivisible Austin showed up to tell Trump he is NOT welcome in our town.

The Texas Observer published an important new feature on everyone’s favorite co-conspirator Senator John Cornyn. They capture his “reasonable-seemingness” perfectly. He’s been saying one thing and doing another since entering the Senate.

Take the pledge to #FireJohnCornyn

The impeachment rally at Austin City Hall is planned to take place the evening before the House floor vote to pass articles of impeachment for Donald Trump. That vote is not yet scheduled.

DEFIANT LIVES is a triumphant film that traces the origins of the world-wide disability rights movement.

It tells the stories of the individuals who bravely put their lives on the line to create a better world where everyone is valued and can participate.

Featuring interviews and rarely seen archival footage, the film reveals how these activists fought to live outside of institutions, challenged the stigmas and negative image of disability portrayed by the media, demanded access to public transportation, and battled to reframe disability rights as a social responsibility relevant to us all.

Join Statewide Indivisibles and Indivisible Houston right here in our hometown for a Senate Candidate Forum featuring Democratic primary candidates for Senate, moderated by Patrick Svitek of the Texas Tribune.

this is the level of relaxation i'm seeking
(amora.golden.retriever IG) pic.twitter.com/Si4unmaZoP