Trump’s latest impeachable offense—pressuring the president of Ukraine to investigate Joe Biden in exchange for military support—has captured the nation’s attention in a new way. The national Indivisible team, along with MoveOn and other partners, has a new website to help organize and make sense of impeachment:

In Central Texas, it comes as no surprise that—with the exception of Rep. Lloyd Doggett—not one representative has shown class or spine. Their fealty to a corrupt president is absolute.

Retiring Rep. Bill Flores appears to be gunning for a cabinet position, retweeting conspiracy theories from rightwing nutjobs and telling the press that it’s Pelosi, not Trump, who is violating the rule of law. It’s clear he’s not leaving office because he grew a conscience.

Speaking of rule of law, Sen. John Cornyn says the quiet part out loud: The Senate will never convict, no matter where the evidence leads. What a check! What a balance!

On a conference call, John Cornyn says flatly that, as the Democrats know, "The senate will never convict President Trump." No caveats about judging on the facts or whatever. Nice to hear it plainly.

So what can we do?

You can and should continue writing your reps demanding a Yes vote on impeachment. But just as importantly, it’s time to organize against venal politicians like Reps. McCaul, Flores, Roy, Williams and Carter—and especially against Sen. John Cornyn. These guys are hopeless. They are dangerous. They are dragging down our country. Let’s donate, knock doors, and vote them the hell out of office.

Read: The Texas Politicians Who Have Rallied to Trump’s Defense, From the Gutsy to the Gutless (Texas Monthly)

The Trump-Ukraine scandal and the march toward impeachment feels like the biggest story in the world. It’s not. Nixon fell in two weeks, and Trump might too, but the crisis of our overheated planet will outlast every news cycle. And, finally, the world is paying attention. Climate activists organized a global strike. Rallies were held worldwide. Major news outlets dedicated hours of substantive climate coverage. We may finally be at the tipping point needed to save our species. The key is to stay angry, and to channel that anger into action.

“Don’t get me wrong, I’m following the impeachment story at every turn. But then I read this and the Ukraine stuff just seems like work gossip from a CVS.” https://t.co/4yAYuCBvDT

All I can say is that, when I understand all these things, I do not primarily feel despair. I feel anger. Because we have the science. We have the solutions. It’s all here, right in front of us, wrapped up in a red satin bow. It’s all been sitting here for literally decades. And no one is fucking doing anything about it.

I strongly believe that anger—at least when it’s directed on behalf of others, particularly those less powerful than you—is essential to effective journalism and effective action. Unlike despair, which is paralyzing, I find it to be a catalyzing emotion.

When I am angry, I am driven to act. When I act, I feel better.

This was in response to two reports issued on the same day: The extremely concerning UN/IPCC report on the health of the world’s oceans, and a report in the journal Science on how oceans could actually be the solution to the climate crisis.

Let’s not despair. Let’s stay angry. And turn that anger into action: 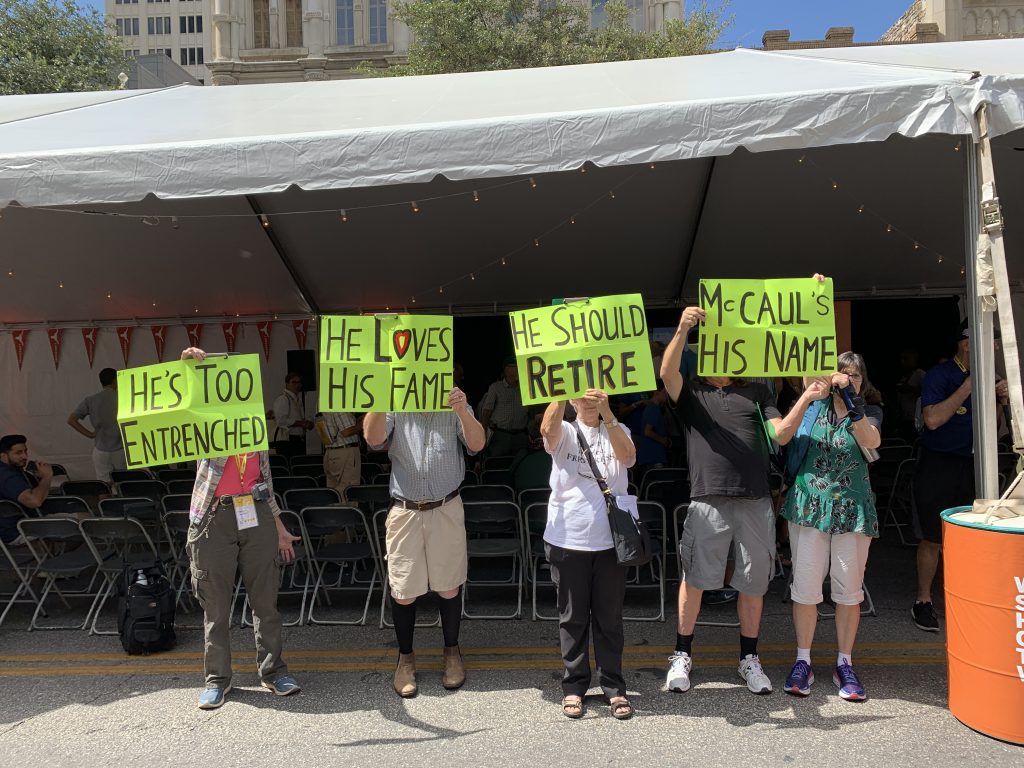 At the end of the session, Rosedale Huddle members rose up and called out McCaul for his fecklessness and avoidance.

Rep. Michael McCaul was at TribFest over the weekend, speaking on a panel with former Obama-era DHS Secretary Jeh Johnson. The topic was “The Threat Assessment” and included questions on the Ukraine whistleblower scandal, Russian election interference, domestic terrorism, and gun violence. For many of the tireless TX10 constituents in the Indivisible Rosedale Huddle, this was the closest to their rep they’d after gotten—after two years of trying.

Here’s Rep. McCaul citing Indivisible members as a driving force for impeachment in the House:

Naomi Klein, author of “On Fire: The (Burning) Case for a Green New Deal”

Event is free. Tickets are required for book signings.

See what proposed constitutional amendments are on ballot

THE GRETA THUNBERG HELPLINE:
For adults angry at a child. pic.twitter.com/JAtIKyG4Va