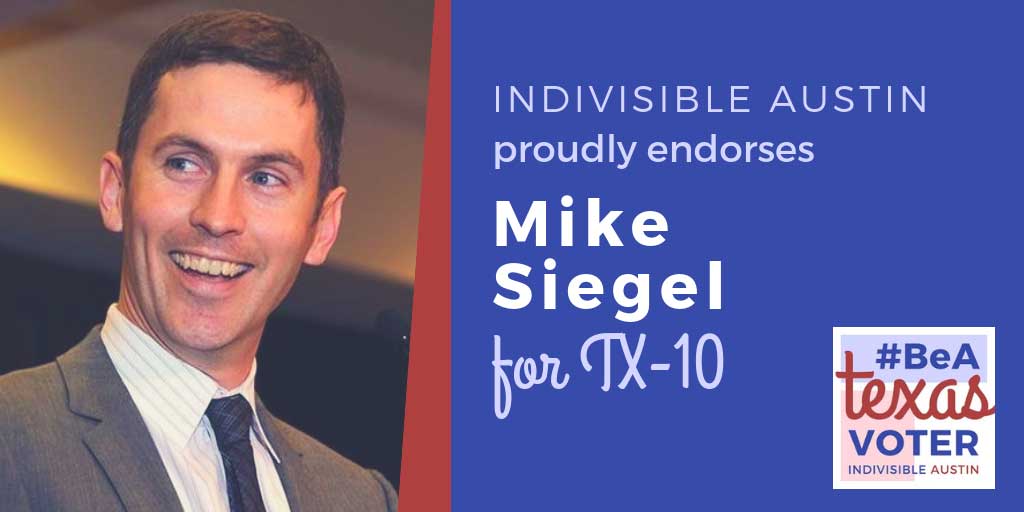 Mike Siegel is the Austin city attorney who sued Gov. Greg Abbott to stop SB4, the worst anti-immigrant law passed in recent memory. If that were the only thing we knew about him, we’d still probably give him our endorsement. But that just scratches the surface.

Like most Texas Congressional districts TX10 is big and stretches from northwest Austin to far west Houston covering parts of eight counties. Of those eight counties, SEVEN are listed in the state’s post-Hurricane Harvey disaster declaration. One year later and 10 percent of people displaced by the storm still can’t go home, and 15 percent of homes damaged by Harvey are still unlivable. We’ll get to that in a minute.

When Mike Siegel talks about the key issues he’s running on, health care is always at the top. Instead of working to take health insurance away from millions of Texans, as the incumbent has voted to do many times, Siegel supports health care for all. His vision of guaranteed health care has no exclusions for pre-existing conditions or reproductive health care. He is also critical of the massive tax scam that benefited the incumbent (the fifth-wealthiest member of Congress and biggest water-waster), and which Congress wants to pay for by cutting…you guessed it…health care!

Back to that disaster declaration. Siegel has made flood control and response one of his key campaign issues. He has argued that we need a national flood control and response strategy. Safety and security dangers posed to Texans by hurricanes and flooding are among the key issues he believes he can address in Congress. We agree that Texas and the federal government both must act to protect our state from the increased threat and destruction caused by Gulf Coast hurricanes, and which disproportionately impact poor communities and communities of color.

On immigration and racial justice issues, Siegel comes from a very important and oft-ignored perspective: that our policies must reflect humanity and common decency. He will fight for a permanent solution for DACA recipients, and to put an end to the cruel anti-immigrant policies the Trump administration and the incumbent support. Even beyond that, Siegel sees how inequitable our policy-making process is, and how it creates discriminatory outcomes for communities of color with respect to everything from policing to education to voter access.

There are miles of daylight between Siegel’s positions, which build on the greatness of Texas and Texans to make us even greater, and the incumbent’s positions that demand Texans live in fear of everything and everyone around them. But the biggest difference is the commitment to actually engaging with constituents and treating them with decency and respect. For nearly two years TX10 constituents have tried to get a meeting with Rep. McCaul and they have been rebuffed by his staffers. No one can remember the last time he held a public town hall. When cornered by a constituent at a non-public event, McCaul said he’d consider a town hall if it were “fair.”

The thing Mike Siegel gets about public service that the incumbent doesn’t is that our representatives work for us and we expect them to solve problems. Instead of hiding from constituents out of fear they might ask hard questions and demand actual answers, Siegel is on the street knocking doors, talking to voters face-to-face, holding town halls, and treating his future constituents with common decency and respect.