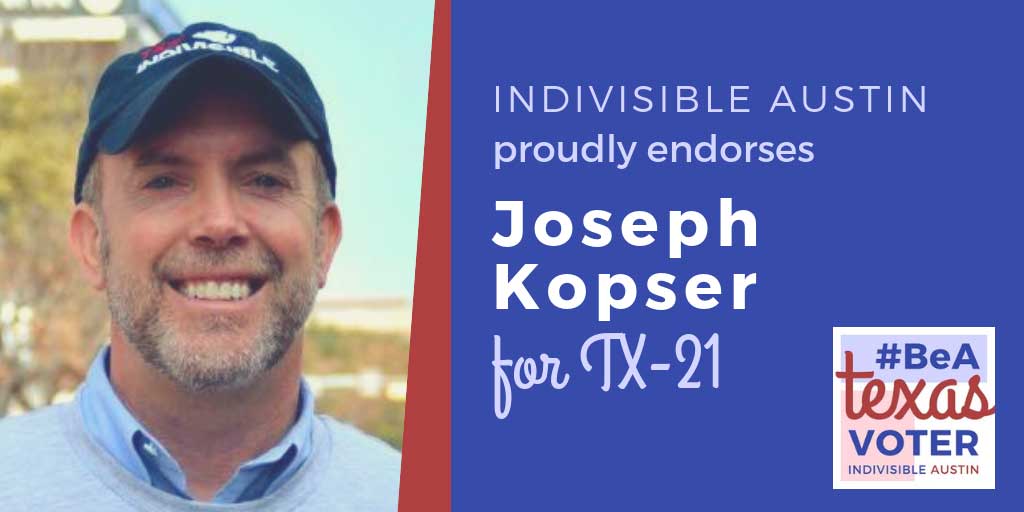 Joseph Kopser, a 20-year military combat veteran and tech entrepreneur, won a hard-fought primary battle that went to a runoff election. Most progressive groups favored his runoff opponent, Mary Street Wilson, but organizations like TX21Indivisible ATX have since endorsed Kopser.

“TX21Indivisible ATX endorsed Joseph Kopser to represent our district in the U.S. House of Representatives. Joseph’s platform aligns with the progressive values of our members, and he’s been vocal about supporting protections for preexisting conditions, opposing family separation, and advocating for sensible gun safety measures. At a time when our country seems hopelessly divided, we know that Joseph prioritizes country over party, and will do the best job of serving the constituents of TX21.”

When Indivisible Austin considered its endorsement, we first determined that we would follow the lead of in-district grassroots organizations like TX21 Indivisible ATX. We then reviewed Kopser’s positions on the top tier issues that have been our focus since Day One.

Kopser’s campaign favors expanding Medicaid in Texas, and in adding a public option to compete with private insurance companies. His website states that “it is critical that we continue to move toward universal health care and it is essential we do not leave mental health behind.”

In June, Kopser joined activists to protest the Trump Administration’s “inhumane policy of ripping families apart at the border.” Kopser is a member of the Truman National Security Project and his website cites their statement that the Muslim Ban is “cruel and ineffective” and the Border Wall “ridiculous.”

Kopser’s campaign supports a platform to reduce gun violence, including a ban on assault-style weapons and high-capacity magazines; national background checks; cash-for-guns trade-in programs; and protection of common-sense state gun regulations, such as bans on open or concealed carry.

Joseph Kopser has demonstrated a steadfast wiliness to engage with constituent and progressive groups, crisscrossing the district and participating in multiple Town Halls and candidate forums. Contrast this to his opponent, Chip Roy, who is also running for the open seat following Rep. Lamar Smith’s retirement. Roy’s past stints as Ted Cruz’s chief of staff and Ken Paxton’s first assistant DA are troubling enough, but he seldom makes public appearance, choosing mainly to meet with donors at ticketed events. Is this who we want representing parts of Austin, San Antonio, and Hill Country?

TX21 residents have a choice in this election: A veteran who served his country and now fights for progressive causes, or another GOP Swamp Creature. Staying home is not an option. Joseph Kopser has our full backing as the person best qualified to protect our most vulnerable citizens and to provide an important check on executive power.