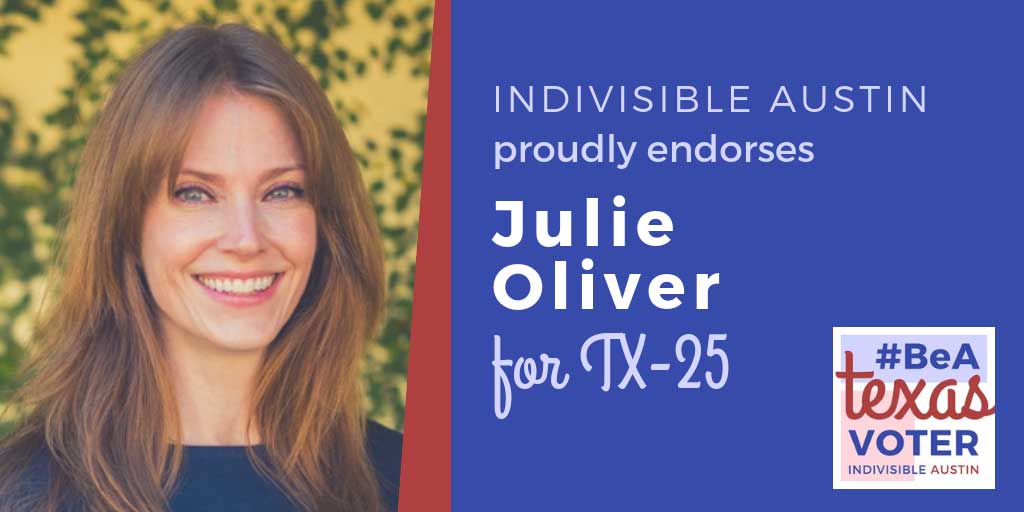 Indivisible Austin is proud to endorse Julie Oliver to be the Representative of Texas’s 25th Congressional District. In May Oliver won a hard-fought runoff to become the democratic candidate for TX25, and she hasn’t stopped fighting since.

Health care is the central issue of Julie Oliver’s campaign. She is committed to universal health care, favoring a Medicare-for-all style system. As a lawyer working in health care law and finance, she brings real expertise to the problem. Oliver focuses on an array of groups whose health care is often marginalized: rural communities, low income women, and women of color, especially African-American women, receiving maternity care. Importantly, she has made not just insurance coverage, but a functioning health care delivery system, especially in challenged rural communities, central to her campaign. The care and thought she has shown for these communities contrasts dramatically the incumbent, who frequently speaks about the need to strengthen rural health care but has voted to end or sabotage the ACA over and over again.

There are a host of other issues where we appreciate the stands that Julie Oliver is taking. For instance, on gun control, she argues for universal background checks, excluding domestic abusers from purchasing weapons, and overturning the Dickey Amendment, which prevents the government from studying gun violence as a health issue. On climate change, Oliver is fighting for the United States to rejoin the Paris Climate Accords and invest in clean energy as a way to reduce carbon emissions and create new jobs and industries for the future. On education, Oliver wants to protect teacher retirement, keep public school funds out of the pockets of private schools, and shut down the school-to-prison pipeline by providing funding for schools that want to reform their unreasonably punitive discipline policies, which all too often lead to students of color in police custody.

However, what really makes Julie Oliver special as a candidate and future Congresswoman, is her approach to TX25. The district is very large —nearly the size of Massachusetts—stretching from south Austin to west of Fort Worth. It is, of course, radically gerrymandered to protect the Republican incumbent. But from the beginning of her campaign, Julie has been dedicated to representing all of TX25. As we mentioned above, rural health care has been an important part of her overall health care position, not because rural voters are her core constituency, (traditionally they aren’t) but because it’s important to the future of the district as a whole and the people who live in it.

Julie Oliver has made it a point from the beginning of her campaign to drive to every corner of the district, putting thousands miles on the odometer. She’s not so much taking a page from Beto O’Rourke’s playbook as she is co-authoring the new story of how Democrats in Texas and around the country campaign. She goes everywhere, listens to and learns from anyone, and fearlessly explains how she and the Democratic party are fighting for them, even if they aren’t supporting her yet.

It’s the only way to win over voters. It’s the right way to govern, and it’s why Indivisible Austin is proud to endorse her candidacy.