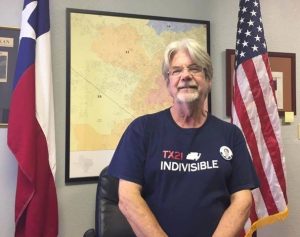 I’d lived abroad for nine years and wasn’t very politically aware. My wife and I moved back to the U.S., to Austin, in 2014, and got active after the 2016 election. I did nothing for a while, fuming and venting my frustration at the TV!

My first action was the Women’s March 2017 in Austin. Then I did a few visits to the offices of Senators Cornyn and Cruz. Summer of last year I started joined the TX21Indivisible Facebook group, and around that time I got more aware of Lamar Smith, and what a piece of work he was, running the Science Council while he doesn’t believe in climate change. I didn’t understand how someone who had such disrespect for science could have any influence over it. And the things he says about climate change! He said that it was good that the polar ice caps were melting, that it would be better for trade. No matter that the seas will rise and cities will flood.

Before I was an activist, I did a little bit of gardening, went to movies, and spent more time seeing my kids out west than I do now. My wife and I traveled extensively and still travel now. I have a wide view of the world — it’s not U.S.-centric. Travel is great. It opens your eyes.

What advice to you have for someone getting started with activism?

Hook up with a group. It’s hard to do on your own. I mean, you can go to protests alone. But connecting with TX21Indivisible enabled me to get some coherence with what I was doing, instead of just showing up to random events. And I made new friends, too.

Becoming involved has made me so much more aware of the consequences of voting — or, rather of NOT voting. I was stunned to realize how Texas is such a terrible state in terms of voting, and there should be a cardboard cutout of our reps, because the non-vote wins all the time. When I lived abroad, I think I only voted once by mail. The argument that voters give that candidates don’t represent all their beliefs, so they aren’t going to vote, basically means that you’re voting for the person you don’t want to be your rep. Denying a vote to a candidate who shares only 70% of your beliefs ensures that the candidate who shares 0% of your beliefs will get elected.

It’s cutting off your nose to spite your face.

I realize now it’s important to get involved, at every level, and vote in every election. It makes a difference. There are elections won by very small margins. Every vote really counts.