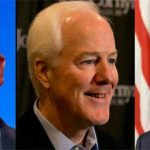 “I’ve got more important things on my mind, so I really don’t have a comment on that.”

“I think the most important thing is to pay attention to what the president does, which I think has been good for the country.”

“I know you have to ask these questions but I’m not going to talk about that.”

—Senator John Cornyn, when asked by the Washington Post whether he or his constituents are bothered by Trump’s racism

What a profile in courage.

Our senator can’t find a single way to criticize a president who has called Mexicans rapists and black women dogs, and who tried to ban Muslims from entering the country.

And if calls to his office aren’t enough, the Washington Post should also hear directly from Texans who reject Trump’s overt racism and Cornyn’s pathetic capitulating.

“Senator Cornyn — the Majority Whip and a senior member of the Judiciary Committee — said that the production of documents Judge Kavanaugh had “generated . . . authored…or contributed to” during his tenure as White House Staff Secretary should be produced to the Committee.  He stated that it “just seems to be common sense.”

“However, less than a week later, following a White House meeting with you on the records production on July 24, the Republican position abruptly and inexplicably shifted.”  …

“The American people deserve to know what changed during this pivotal, Republican-only meeting on July 24.”

What the hell is going on?

Read the full letter, and then call both Cornyn and Cruz (both of whom are on the Judiciary Committee) to ask what happened at that meeting, and why they don’t consider records from Kavanugh’s time as White House secretary to be relevant.

Indivisible East Bay has another great toolkit on Kavanaugh >>

Come help build the blue wave, call by call, voter by voter, voting plan by voting plan—every Tuesday night from now until November 6th. Indivisible Austin is so grateful to have ADAPT of Texas graciously hosting us. 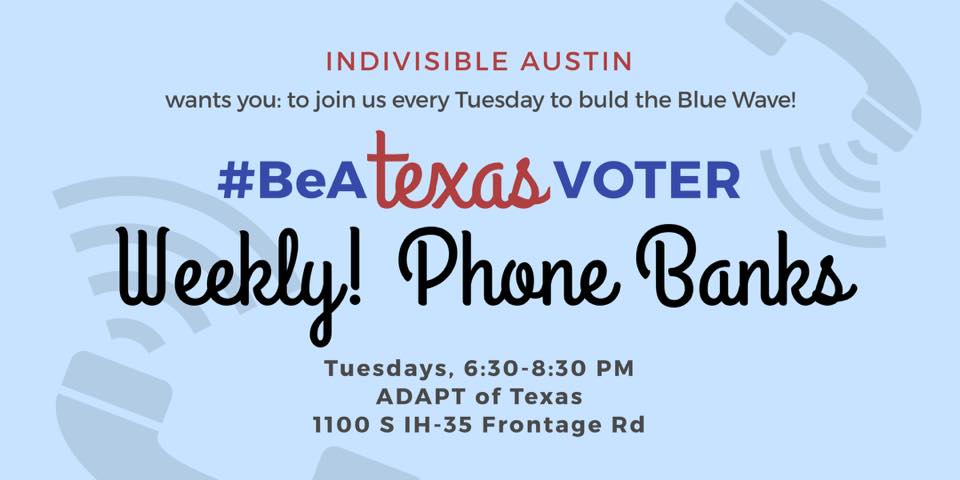 A certain 10-year-old in our lives raised this question: “If they are Trump supporters, why are they protesting? They’re getting exactly what they want.”

He was referring to Saturday’s “Rally Against Far-Left Violence” at the Texas Capitol, where Nazis and the Nazi-adjacent were vastly outnumbered by counter-protesters. We were there, as were a new group calling themselves the “Austin Auntiefa,” a spinoff of the LOLt-Right Marching Band, which we featured back in March.

This time around, the Austin Auntiefa got up in the grills of white nationalists, many of them armed, with cookies, balls of yarn, and ginger snaps. Compare these women’s bravery to the abject cowardice of, say, John Cornyn. As if we needed more reason to elect more women to Congress.

It’s also worth noting that the Nazis (and Nazi-adjacent. Whatever.) would not have been welcome at the Capitol without the sponsorship of a member of the Texas Legislature. State Rep. Dan Flynn not only signed the paperwork, but also spoke at the rally.

Indivisible Austin is dedicated to making sure that our voices are heard here in Texas and in Washington, D.C. during the midterm elections. Soon we’ll be organizing groups of volunteers to canvas neighborhoods. We’ll be educating voters and working to boost turn out.

We can’t just send volunteers out alone with no preparations or supplies, though. We need clipboards, printed leave-behind material, ID tags, water and dozens of other things that you wouldn’t immediately think of, in order to do it right.

All of these things cost money, and that means we need you. Make a gift to Indivisible Austin today.  Add your drops to this year’s wave. Heck, add your buckets if you can.