Just a few weeks ago, when all eyes were on them, Austin City Council took the first steps toward investing in communities’ health and wellbeing instead of policing. However, when they thought no one was watching, they handed the Austin Police Department more than $1.7 million in state grants last Thursday—and they plan on giving APD more money.

This is why we must actively demand better from our elected officials.

On September 3, Austin City Council will be voting on a total of more than $467,000 grant funding for APD for aerial surveillance and body armor. These grants are further expressions of APD’s warrior mentality and will lead to increased criminalization and escalation against Austin residents. There was also an attempt to further fund the most policed streets in our community, but fortunately, the proposal was dropped due to lack of federal funding. 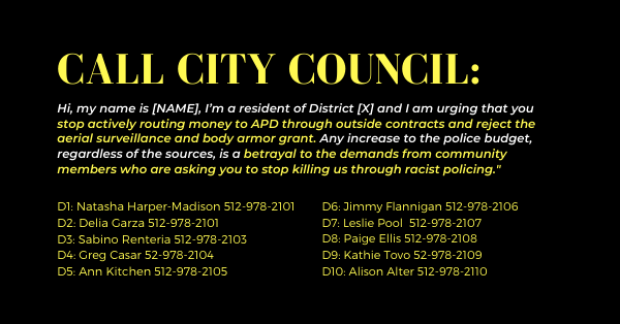 Call script: “Hi, my name is [NAME], I’m a resident of District [X] and I am urging that you stop actively routing money to APD through outside contracts and reject the aerial surveillance and body armor grant. Any increase to the police budget, regardless of the sources, is a betrayal to the demands from community members who are asking you to stop killing us through racist policing.”​

City Council District Map – find out who your council member is

Apply to be an election poll worker 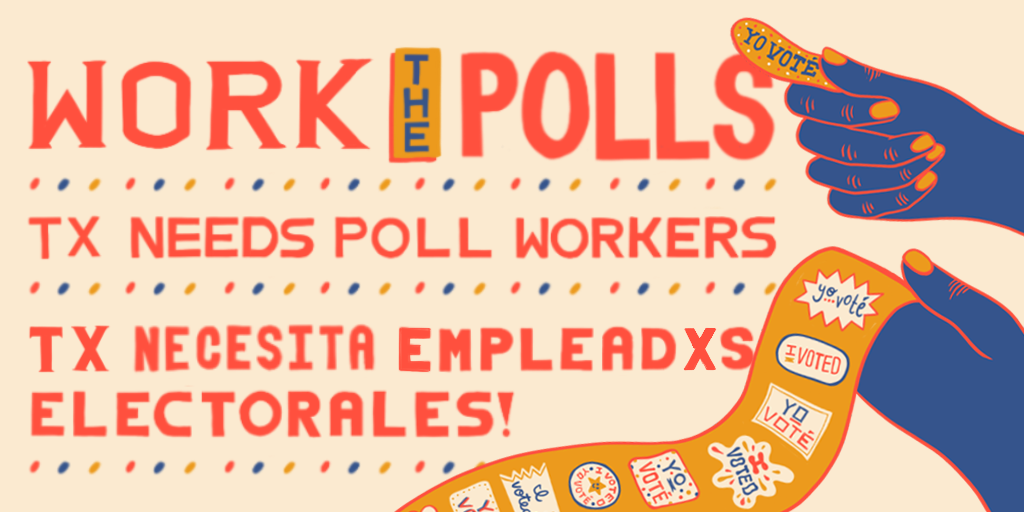 In 2018, six out 10 poll workers were 61 and above. In the middle of this pandemic where our older generations are among the most vulnerable, us young people need to step up and protect our elders. Registered to vote? Great! Take your civic duty one step further and register to be a poll worker! Texas needs poll workers, Texas needs us.

If you do not meet the eligibility requirements to be a poll worker, there are other opportunities to help save democracy. MOVE Texas is making calls to 300,000 unregistered Texans to make sure they’re registered to vote before the deadline.

Apply to be a poll worker 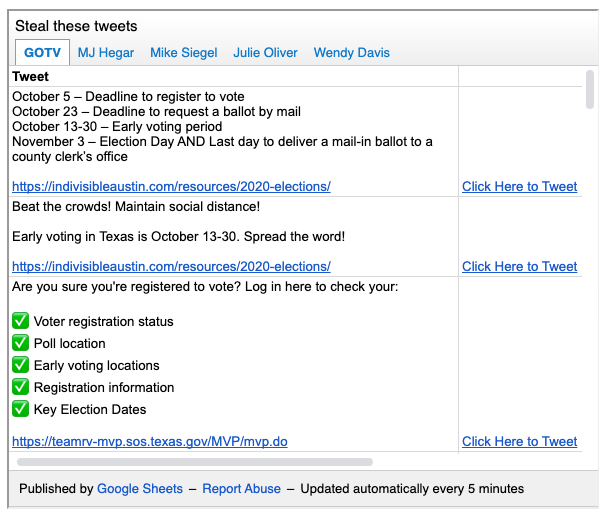 If you’re on Twitter, we’ve set up a tool to easily send tweets with important information about voting and select down-ballot races. Let us know what you think!

7 p.m. Join us for the monthly Indivisible National Activist Call! All group leaders, group members and other Indivisible activists are welcome.

5:30 p.m. Time for a break from phone banking! Relational Organizing is an effective way to improve voter turnout, and we’d like to share all the ways you can try it out. Join Indivisible Austin and Wimberley Indivisible, along with the Julie Oliver campaign in learning about how you can use this approach for races across the state. Everyone is welcome!

5 to 8 p.m. at Celebrino Events Center, Georgetown. Mike Gleason is the Democratic candidate running against incumbent Robert Chody—the “Live PD” reality show star whose department is responsible for the death of Javier Ambler. Wilco residents have a chance to vote him out.