Feb. 3: Last day to register to vote in the primary

Make sure you are eligible to vote.

Vote on a newspaper ad to defeat John Cornyn

The Payback Project is a new campaign from the national Indivisible team targeting the GOP senators who voted for a coverup in the impeachment trial. One of their tactics is to take out a newspaper ad going after certain senators—including John Cornyn!

(After you vote you’ll be directed to an optional donation page. Indivisible Austin does not receive direct funding from the national Indivisible Project. If you prefer donating to your local group, you can do so here.)

If the impeachment trial goes as expected—acquittal without a single witness called—our senators will be responsible for a historical coverup. Their names will be in history books, listed among the enablers of our Democracy’s downfall. It’s time to call and let them know.

Can’t get through? Find additional numbers

Can’t get through? Find additional numbers 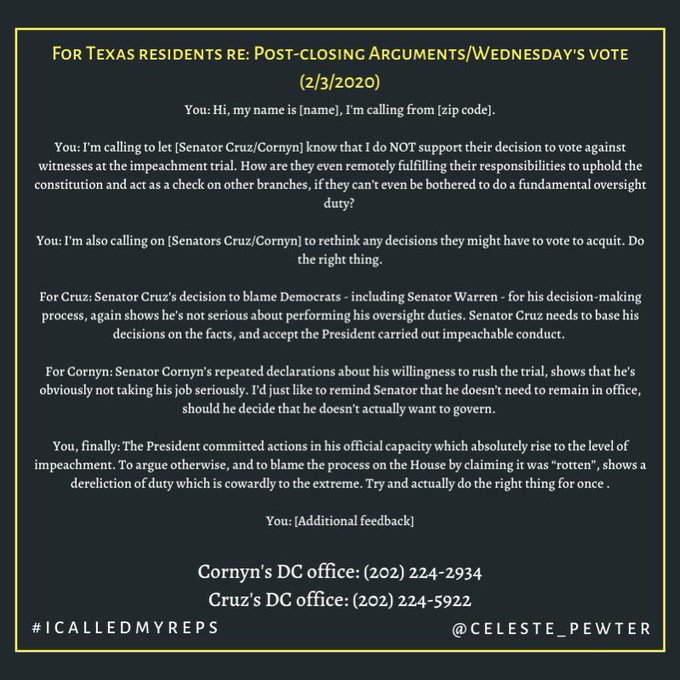 Find or organize a rally at rejectthecoverup.org

Sign up to be notified of Indivisible Austin GOTV volunteer opportunities

Here are some of the candidates running to defeat John Cornyn:

In TX21? Find out more about Chip Roy!

Let’s talk about the climate crisis…and the Super Bowl

We hope the team of your choice was victorious! (Go KC?) The city in which the big game was played is sinking into the sea.

Read: Not to Ruin the Super Bowl, but the Sea Is Consuming Miami (Wired)

Sign up to be notified of Indivisible Austin GOTV volunteer opportunities

Last day to register to vote in the Texas primary.

Wednesday, February 5th at 5:30pm, hundreds of thousands of Americans will mobilize with a simple demand: Reject The Coverup

Find or organize a rally at rejectthecoverup.org

Party For The People: Candidate Happy Hour & Hang Out

Join GoodPolitics, KUT Austin, USTomorrow, the Austin Monitor, and MOVETexas as we get to know the people on our ballot.