President Donald J. Trump, for the third year in a row, will address farm and ranch families at the American Farm Bureau Federation’s 101st Annual Convention. The address is scheduled for January 19 in Austin, Texas, at the Austin Convention Center.

When Trump was in Austin last November, Indivisible Austin helped to organize a rally opposing his presence in our city.

This time around, we are choosing instead to focus on local organizing to vote Donald Trump and his enablers out of office at all levels of government. (We will support any individuals or groups who feel called to organize a protest of Trump’s visit.)

Trump speaking to farmers does raise some interesting points. First, is his lie that smaller farms and farmers are “big beneficiaries” of cash payments intended to ease the effects of Trump’s tariff war with China. 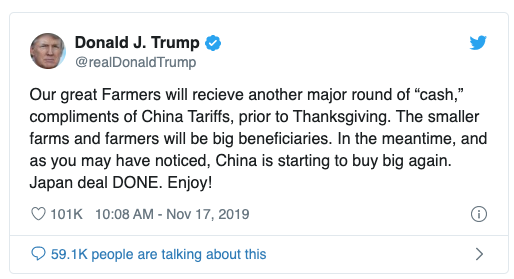 Additionally, according to the Washington Post, the past two years have been marked by a sharp rise in bankruptcies in the nation’s deepest farm country.

Sign up to volunteer for upcoming meetups and blockwalks