The bushfires currently decimating large swaths of Australia, a country the size of the continental US, were both foreseeable and largely preventable. However, failure to effectively consider climate change impacts and adaptation, coupled with some misguided land management practices, have led Australia to the current catastrophe. This will have long-term impacts on politics, the economy, sustainability and entire communities.

With the bushfires, climate change, land management and disaster preparation are no longer abstract concepts, and concerns span previously disparate voting blocks as people and animals die, homes and livelihoods are lost, whole cities choke on hazardous air and resources and patience are tested as never before. We’ve become the canaries (and koalas and kangaroos) in the coal mine, and we’re dying.

Business as usual and politics as usual get tossed out the window when catastrophe causes impacts to truly hit home. As we struggle to protect lives and mitigate further damage, there is an opportunity to better target political will and take positive actions for moving forward.

Bushfires in Australia have gotten so bad that they’re generating their own weather patterns[1] and fire projections can’t keep pace[2]. The bushfires have already killed 25 people and burned over 10 million hectares (25 million acres) of land[3], more than 10 times the area lost in the Amazon 2019 fires and far more than lost in the US in 2019[4]. An estimated billion animals have died[5].

Our national capital[6] and largest capital cities have been encircled by fires and blanketed in hazardous smoke. The fires and smoke have affected six of our eight states and territories, and the smoke, visible from space, has even spread across the Tasman Sea to New Zealand and on to Chile and Argentina.

Around New Years in my home state of New South Wales (NSW) alone, 20 people have died and over 500 homes have been lost[7], including lives and homes of our brave volunteer firefighters. Nearly 1,600 homes have been lost in NSW since the start of bushfire season just a few months ago. Other large states, Victoria and South Australia, have lost two lives each due to the bushfires, while over 2,000 homes have now been lost Australia-wide[8]. Damaged power substations also threaten energy supplies. 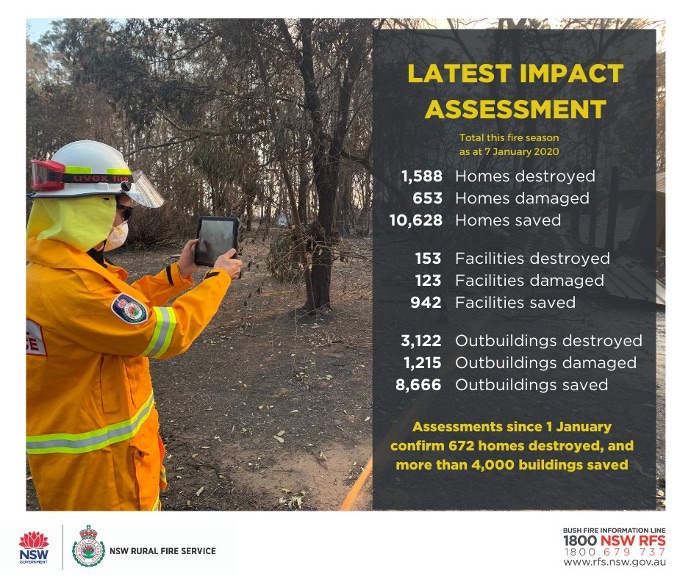 For perspective, Australia’s population is around 25 million (between Texas and Florida in size) and generally clustered around major coastal cities. We’ve had towns where thousands of residents and tourists scrambled to beaches for shelter as their towns burned[9] and we’ve seen the military called in to help conduct Australia’s largest mass evacuations[10].

Shortages of food, water, fuel and power, as well as significant road closures, have affected peoples’ ability to either bunker down or to evacuate. Securing feed and water for animals, already limited by drought, is problematic. Some farmers have reported shortages of bullets to put burned animals out of their misery.

Tourism is taking a beating from climate change and the bushfires. Half of the Great Barrier Reef[11], the world’s largest reef and visible from space, has died from ocean warming[12] and bushfires are damaging key tourism areas. Half of Kangaroo Island, Australia’s third-largest island and known for its fine food, tourism and conservation, has been lost to fire[13]. Over 9,000 insurance claims have been lodged for the current bushfire so far, with many more expected[14].

We’ve had several days where everyone was advised to stay indoors due to extreme heat and ‘apocalyptic’ air conditions 11 times ‘hazardous’ levels[15]. Air conditioning systems struggle to keep up with the heat some days. Discussions around which face masks are most effective against inhalation of bushfire smoke and wearing face masks to protect against the smoke in metro cities have become commonplace.

Personally, I’ve largely been spared the worst; certainly, nothing like the many that have suffered. I did stay up one night following the Fires Near Me (the most Googled term) app and news reports to see if I’d have to evacuate my kids and myself due to a fire 3km away from our home. A nearby neighbourhood was protected only by dumping fire retardant by plane and because backburning had been conducted just two weeks prior[16]. 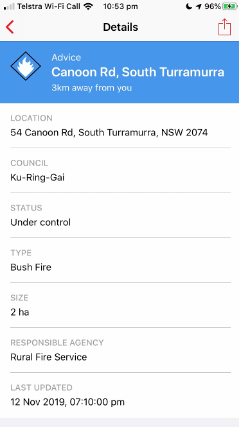 Mates I’ve long known and respected have faced much worse as they and their families have fought to save family businesses, from a composting business and rental properties south of Sydney to timber operations up the North Coast. 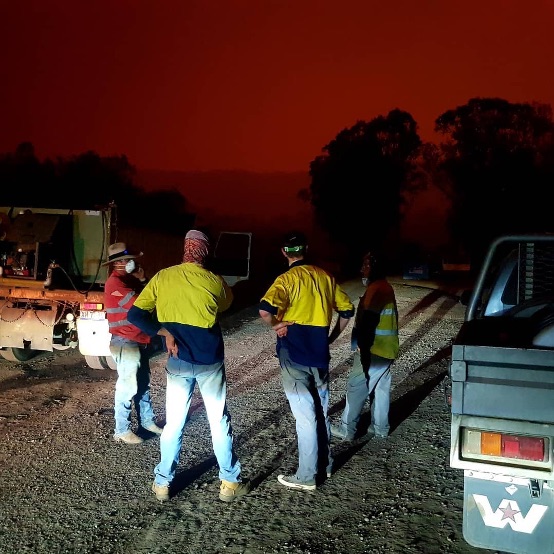 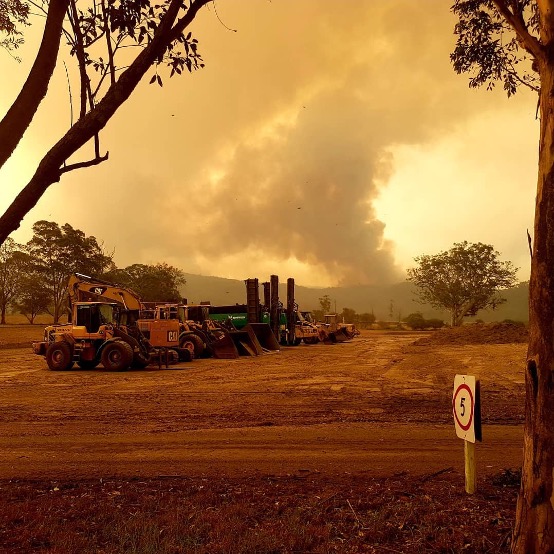 This was Foreseeable and Largely Ignored by Elected Officials

The most frustrating aspect for me and many others is that this was foreseeable and many of the worst impacts were largely preventable. Australia has long had droughts and bushfires, but these have been affected dramatically by climate change. Certain land management policies and limited opportunities to do controlled burns have also led to large fuel loads under these adverse conditions.

For millennia, Aboriginal people set and managed fires in controlled ways through mosaic burning; fires were considerably smaller, more frequent and a regular part of life, with minimal impacts on people and wildlife. Prescribed burning now revolves around population densities, drier climate and fuel loads, resources to manage burns properly, impacts of smoke on populated areas, habitat conservation, management policies and regulatory approvals, all of which impact on the ability to undertake preventative burning.

For decades, detailed projections have shown that extreme weather events would be more frequent and more severe globally. If anything, most projections have understated the extent of actual severity. Public reports and government inquiries have consistently highlighted impacts, risks and the need for adaptation.

Decade after decade, heat records have been broken. A year ago, all 15 of the world’s hottest temperatures were in Australia[17]. Western suburbs in Sydney have exceeded 48.9C (120F)[18]. Droughts have become so prevalent that entire states have been in drought and the definition of drought changed to reflect the new reality[19].

Australia was a world leader in understanding and addressing climate change when I chaired the Australian Greenhouse Conference 2000, and we had good government support for designing emissions trading schemes including bringing out carbon traders from New York and London. However, we’ve long since lost that leadership.

Australia eventually placed a price on carbon, only for that to be repealed, and much of our current claimed progress against climate change targets[21] is due largely to accounting methods and negotiations rather than substantive action[22].

The world has failed to effectively address climate change and adaption, then attacked those that speak out as their worlds are either flooding or burning down around them. More people take to the streets demanding action, while the science to support better decision-making is attacked, belittled or suppressed. Australia’s political leadership has failed to show their understanding of the full significance of these issues.

Australian Prime Minister Scott Morrison has horribly mismanaged and misjudged the situation. Morrison had actively promoted coal in Parliament and repeatedly denied the connection between climate change and Australia’s worsening conditions, as had previous PM Tony Abbott (to his credit, Abbott has been serving as a volunteer firefighter)[23].

In a leadership spill, Morrison had replaced former Prime Minister Malcolm Turnbull, who was vocal about the need to address climate change and cast aside by the right wing of his party, with climate change deniers and skeptics holding undue influence due to electoral politics. Then, in an election focused on climate change with the opposing Labor party widely expected to gain power, Morrison and his coalition party reaffirmed that all politics is local as their support for large coal mines in the key state of Queensland helped cause Labor to lose the ‘unlosable election’[24]. The local economic impacts of the Adani mine in particular were crucial to Australia’s elections, even though the Adani Group is India-owned and the mined coal was destined for power generation in India[25].

As PM, Morrison also refused to meet with 23 former fire and emergency chiefs that warned of the need for additional fire-fighting aircraft and other capacity[26]. The PM then took pains to not address the smoke enveloping Sydney[27], instead promoting his ‘religious discrimination’ bill[28] that actively condones discrimination as long as it’s done in the name of religion. Morrison promptly left for an unannounced holiday in Hawaii, keeping his whereabouts secret while Australia burned until public outcry became overwhelming.

When he eventually returned following the death of two volunteer firefighters, Morrison struggled with damage control due to overwhelming public criticism for his lack of leadership and physical presence. Morrison also said he wouldn’t take as personal the angry residents and firefighters that refused to even shake his hand for photo ops, including the firefighter who had just lost his home while saving those of others[29].

Morrison eventually committed additional Federal resources to help fight the bushfires, but has failed to consult effectively with local politicians[30] and leaders on the ground like the NSW fire chief[31]. Morrison also eventually postponed a planned trip to sell more Australian coal to India.

Some argue that now is not the time to cast blame or to question political leadership. However, domestic and international attention are now focused on Australia’s conditions and elected officials have prime opportunities to redeem themselves for past inaction.

State and Territory governments are largely responsible for dealing with natural disasters, and they often exert the most control over policies that affect the scale of disasters (such as land management). The NSW government’s response to the bushfires and leadership have been perceived as strong, but governments’ leadership and ability to adapt will continue to be tested.

NSW Environment Minister Matt Kean understands the significance, recently stating “Longer drier periods, resulting in more drought and bushfire. If this is not a catalyst for change, then I don’t know what is.” and “We need to reduce our carbon emissions immediately, and we need to adapt our practices to deal with this kind of weather becoming the new normal.” [32].

Oftentimes, things have to get worse before they can get better. Calling out these injustices and voting accordingly are actions that individuals can take, and the fact that people are increasingly speaking up and trying to hold institutions more accountable in order to bring about change is what gives me some optimism in otherwise dark days. While bushfires have had devastating impacts across Australia, the attention they’ve brought about can and should be channelled to adopt and fund sustainable practices to reduce future risks. Aussies deserve at least that much, considering what they’ve been through.

Russ Martin (@RussMartinMS2) has over 29 years’ experience in product stewardship, public policy, bioenergy and sustainability, both in government and as an advisor to industry and governments. These roles have been in the US, Australia, New Zealand and Middle East. He moved from the US to Australia in 1997, and Sydney has been his home ever since.