In the recent wave of anti-choice legislation—in Alabama, where 25 white male Republicans decided the issue; legislation in Georgia that criminalizes abortion for residents in or out of the state, and the GOP lawmaker in Missouri who voted along with the rest of his party to criminalize abortion, citing “consensual rape”—it’s easy to despair. But step back and see the bigger picture behind these frantic efforts to overturn established law of the land.

Don’t lose sight of progress: In Nevada, a majority-female legislative body is prioritizing women’s health and safety issues, prison reform, and gun safety, while reports of sexual harassment forced one male lawmaker to resign. Don’t forget that last September, only months after Ireland made abortion legal—for the first time ever—the conservative, Catholic country made them free.  Remember last March that Washington state passed a state law that ensures insurance companies will be required to pay for abortions. THIS is what happens when women–and other historical minorities (who are now a majority) finally have a voice.

This may in fact wind up being the very issue that galvanizes the vote, as these draconian, unconstitutional legislative acts get more and more media exposure—especially highlighting the GOP’s hypocrisy. In Pennsylvania, for instance, GOP representative Tim Murphy, a strong anti-abortion activist, resigned from the house after—wait for it!—reports surfaced that he’d asked his extramarital mistress to have an abortion. Alabama governor Kay Ivey, who signed the unconstitutional anti-women abortion ban in Alabama, said in a tweet, “this legislation stands as a powerful testament to Alabamians’ deeply held belief that every life is precious & that every life is a sacred gift from God.” And then the next day she presided over an execution—her seventh in her tenure as governor.

Even staunch conservative Pat Robertson said Alabama “has gone too far.” Even House GOP leader Senator Kevin McCarthy. The GOP knows they’ve pushed women too far and the backlash is coming—remember the sizes of the crowds—globally—in the Women’s March the day after Donny was inaugurated? Don’t underestimate the numbers and power of the opposition to this antediluvian legislation and attitudes.

The world has changed, warriors, even if the old white male guard doesn’t want to believe it. Women, youth, and “minorities” are now the majority—and they will not go backward. We may have to struggle through the death throes of the terrified aging white man as he realizes his monopoly on controlling world events is ending, but it will end. Stay in the fight. If every woman, young person, and ethnic group voted we would put a stop to this regression in the very next election.

And just to put another little glimpse of the inevitable future in your view—this week Taiwan legalized same-sex marriage—the first Asian country to do so. Change is a-comin’, friends, whether the GOP wants it or not.

Despite being asked by the Mentally Deranged Dotard to state that he hadn’t obstructed justice, Donny’s former lawyer Don McGahn refused.

In fact a surprising wave of conservative and Republican lawyers are condemning Trump for abuses of power—and the letter from last week defending Mueller’s investigation and stating that the report showed plenty of grounds for obstruction of justice charges against the Very Stable Genius is up to more than 800 signatures, at last check, many of them Republicans.

Former TV host Larry Kudlow, now serving as Director of the National Economic Council (aside to future generations who may read this—no, really! This happened!), contradicted Donald’s laughably ignorant view of tariffs (that they will put “$100 billion into the U.S. Treasury” (no, really, future people, this happened!)—on FOX News, of all places, acknowledging that the trade war Don John has kicked off will hurt American consumers.

Voters are figuring out they’ve been had; this Midwestern farmer who voted for Trump is set to lose $150K thanks to Donny’s whose-dick-is-bigger tariff battle with China, and says he’d never vote for the Commander of Cheese again.

Mitt Romney, who every now and then grows a spine, spoke out against a judge supported by Don John and the rest of his GOP toadies, refusing to vote to confirm a federal judge appointee of Donny’s who referred to President Obama as “an un-American impostor.”

We also learned this week that top Department of Homeland Security officials challenged the Very Stable Genius’s plan to carry out mass family arrests—a likely cause of Donny’s subsequent purge of the department.

His businesses are tanking (again). Mar-A-Lago’s revenue dropped 10 percent, and Donny can’t seem to give away condos at Trump Tower, New York’s least prestigious address. Donald’s Doral resort is also in steep decline, illustrating his mounting business problems. Eric Trump said the resort was “on fire,” but the company later said profitability was down 69%. (Maybe he meant it’s literally on fire?)

Donny’s boy Scott Pruitt, former head of the Environmental Protection Agency who resigned amid investigations into his inappropriate spending of taxpayer dollars, will be required to repay $124,000 of the more than $1 million excessive travel funds he spent while in office, on recommendation from the EPA internal watchdog. The best people!

The House in DA HOUSE

The House passed a bill that will ban discrimination based on sexual orientation or gender identity. While it will likely not pass in the Senate (that’s if Mitch McConnell doesn’t stifle it first), it’s another indication of progress moving relentlessly forward, even as the old white men of the GOP cling to it by their fingernails.

Just when you think it can’t get any dumber, there’s this: Ted Cruz doubled down on his support of Donald’s ludicrous “Space Force” because—and I’m not making this up, “Pirates threaten the open seas, and the same is possible in space.” You guys…BECAUSE SPACE PIRATES.

After one broadcaster realized the inequality of representation of women on TV news shows and corrected the imbalance, the movement has gone global, with hundreds of shows in Great Britain and across the world following suit to keep parity between the genders in guests and commentators.

If Howard Stern can reform into a decent human being, there’s hope for anyone.

At Atlanta’s Morehouse College Sunday commencement ceremonies, the keynote speaker–billionaire investor and entrepreneur Robert F. Smith–unexpectedly announced that his family would be creating a grant fund to pay off the entire class’s student loans. “Everyone started crying and jumping for joy… It was him speaking from his heart.”

Here’s a puppy high-five. Now fight on–we have work to do. 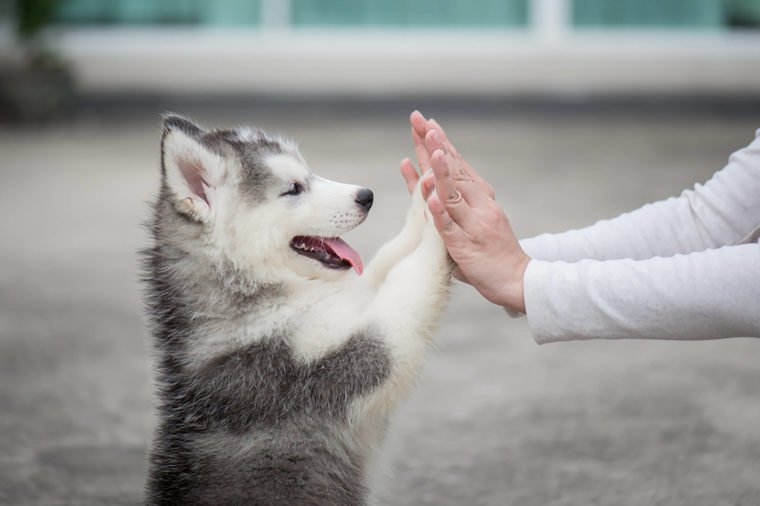