In a clear incitement of racist violence, the president tweeted a video that intercuts four words spoken by Rep. Ilhan Omar with graphic footage from 9/11. Our representatives—and presidential candidates—should all condemn the president’s latest Islamophobic demagoguery.

Democratic representatives need to make clear that the Congresswoman has the party’s support. Presidential candidates should issue statements that support Rep. Omar and clearly denounce the president.

Our GOP representatives should not be let off the hook, either. Our expectations for them have sunk low, but racism and attacks by the White House on the legislative branch of government are bipartisan problems.

Here are the statements issued so far. We will update this page as new statements are made.

This clip has virtually nothing to do with anything but appears to be Ted Cruz’s statement on the matter.

Agree. Watch and make your own assessment. https://t.co/xVJ81pYqX2

No statement, except to retweet the president. 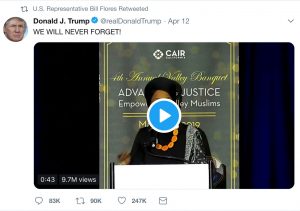 Trump’s unconscionable use of 9/11 imagery for a low attack on @IlhanMN debases his high office and debases the memory of those lost. He inflames hate to distract from the multiple failures of his Administration.

President Trump is maliciously targeting and endangering the personal safety of @IlhanMN, a Muslim Congresswoman, who dared to point out that too often the entire Muslim community is defined by the worst acts of a few.

I was teaching in Brooklyn, NY on 9/11. I felt the terror and uncertainty, the pain and suffering. And I saw New Yorkers come together to support each other.

Trump’s racist attacks on @Ilhan are the worst type of response. A leader should bring us together, not tear us apart.

The president and those who support him are weaponizing a national tragedy, a terrorist attack on this country, for political gain. They are deliberately distorting @IlhanMN's words to intimidate her, demonize an entire religion, and divide us.

I am grateful for @IlhanMN's courage and leadership and I stand with her – and with others targeted by the President's anti-Muslim rhetoric.

The President is inciting violence against a sitting Congresswoman—and an entire group of Americans based on their religion. It's disgusting. It's shameful. And any elected leader who refuses to condemn it shares responsibility for it.

We are stronger than this president’s hatred and Islamophobia. Do not let him drive us apart or make us afraid.

The memory of 9/11 is sacred ground, and any discussion of it must be done with reverence. The President shouldn’t use the painful images of 9/11 for a political attack.

Just so we are clear on basic notions of reality:

When someone calls out a public official for things they said, it is not endangering their life or inciting violence.

Claiming otherwise is just an attempt to silence your critics.