“Exit polls, Election Day polls and actual returns showed significant gains for Democrats in suburbs and among independents…. Democrats have captured the middle.”

If you’ve heard people bemoan that last Tuesday’s elections weren’t a decisive win for Democrats, please smack those voices down—Tuesday was a gorgeous win for sanity from the local level up—and the local level is where our movement builds and really matters.Democrats flipped the House, gained hundreds of legislative seats, secured the majority of state attorneys general, and garnered two-thirds of the seats up for grabs. Of those we didn’t, most were Republican-held seats in deep red areas that were always highly unlikely to flip.

Women and LGBT candidates were elected in record numbers. Not only did Minnesota elect its first openly gay Congresswoman, but she defeated Jason Lewis—remember him? The guy who bemoaned the fact that he couldn’t call women “sluts” anymore.

Some environmental/conservation wins. In Georgia, up to $20 million of existing sales tax each year will go to land conservation; Florida banned oil and gas off-shore drilling; and in Nevada, electric utilities must now get 50% of their electricity from renewable resources by 2030.

Here in Texas we flipped four influential state appeals courts—in Austin, Houston and Dallas—and Dems picked up 12 seats in the Texas house and broke the supermajority in the senate, meaning that they will now need Democrat support to bring bills to the floor. In Austin, 7 ballot initiatives were passed aimed at affordable housing, libraries and museums, parks, infrastructure, and health care, while we voted down a Koch-brothers-funded proposition to force unnecessary budget “audits.”  Despite heavy intentional redistricting by the GOP in the Dallas metroplex to ensure they would never lose elections in that area, the GOP nonetheless lost 12 of 14 seats there, flipped by the Democrats.

And just for symbolism, first-time candidate Erin Zwiener delivered both a win to the Texas house and a baby during her campaign, thus giving birth to the future while also working to create a better one. J

Even where we lost, we showed how much progress progress is making in a year of record-breaking voter turnout: In dozens of races lost to Republicans they had to fight tooth and nail to eke out a win by the narrowest of margins. In heavily GOP-gerrymandered Texas, four historically double-digit GOP offices were won by scant single digits, and Beto came within a hairbreadth of defeating Rafael Cruz.

And if you really want a delightful treat, try to picture Mike Pence administering the oath of office to two Muslim women on a copy of the Qur’an, or the look on the face of the Colorado baker who refused a cake for a gay wedding when it sinks in who he now has for a governor. Is the federal government messed up? You betcha. And it’s discouraging that so many people are still supporting so much anti-American, anti-decency behavior. BUT…! Change happens from the ground up, and Tuesday showed that the earth is shaking, babies.

Meanwhile the GOP “family values party” demonstrated quite literally that there are no depths to which they will not sink in abandoning decency for party agenda by electing three indicted felons, a white nationalist, and a dead pimp. No, seriously.

Overall, this election was a win. And it just keeps getting better. As this article states, here is the key takeaway from this election that we must continue to build on [emphasis mine]: “Exit polls, Election Day polls and actual returns showed significant gains for Democrats in suburbs and among independents. In the Washington Post-Schar School Election Day poll of battleground district voters, independents preferred Democrats by double digits, and independent women favored Democrats by more than 20 points. Democrats have captured the middle. The polling also shows that young voters and racial minorities — the future American electorate — turned out in healthy numbers for Democrats.”

This is a marathon and not a sprint, folks. We’re not there yet, but Tuesday’s results should show us how effective our sustained efforts to safeguard democracy have been—and can continue to be if we stay in the battle.

After last week’s Google-employee walkout, the company has announced it will no longer require forced arbitration for sexual harassment or assault claims.

Motel 6 will pay $7.6 in damages to Hispanic guests in a class-action lawsuit for illegally alerting ICE to guests they suspected to be undocumented immigrants. The company will also sign a two-year consent decree barring it from sharing guest data with immigration authorities absent warrants, subpoenas, or threats of serious crime or harm.

Even FOX News found Donald’s ad too racist—the one about the immigrant who came in during George W. Bush’s administration, and was released by Sheriff Joe Arpaio, and who killed two police officers.

Feel-good Stories of the Week

RBG is back, babies. 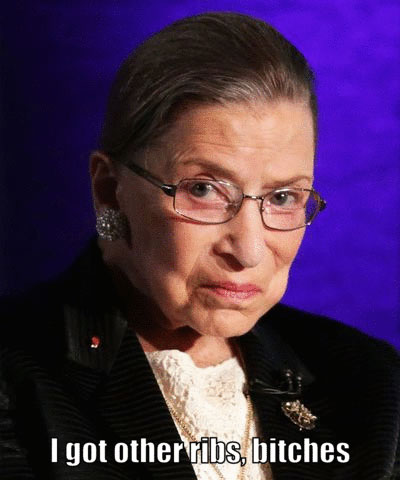