No, that’s not “Things Americans say about Donald Trump” (or at least not just that). That’s from a statement Kim Jong Un issued referencing security adviser John Bolton, while making noises about backing out of Donald’s much-vaunted meeting with the mentally deranged dotard in chief. I know this is hard to believe, but the very stable genius seems to have been braggadocios before having any reason to. Talks with North Korea are seeming less likely after Kim Jong Un announced his country would never stop their nuclear program in exchange for economic dealings with the U.S. Does this mean Don John won’t get his self-touted Nobel Peace prize?

Elsewhere in the world, things are getting so bad even Rex Tillerson is full of warnings about Donald and the demise of democracy…but there’s lots and lots and lots of progress to report this week. (So much is going against Donald’s administration, in fact, that apparently even Sarah Huckabee Sanders couldn’t figure out how to spin it—the White House canceled three briefings on successive days last week.)

The Senate voted to overturn the FCC’s attempt to repeal net neutrality rules 52-47. Though the measure likely won’t pass the House nor make it through the White House, it’s a sign that some GOP senators (or at least John Kennedy, Lisa Murkowski and Susan Collins) understand that they have a duty to protect America and her people, and perhaps others may locate enough of a spine to stand against Donald and his cronies’ efforts to dismantle her democracy.

In further evidence, the Senate also backed the intelligence community’s findings that Russia interfered with the 2016 elections to benefit Donald.

And 20 Republicans in the House have signed a petition to force a vote on DACA to give Dreamers legal residency status and offer a path to citizenship, despite Paul Ryan’s increasingly frantic and petulant efforts to stifle the rebellion. Just five more GOP signatures, together with all the Dems in the House, will force a debate on the issue.

Dems flipped a House seat in Pennsylvania on Tuesday—bringing the total number of flipped seats since Donald’s attempted coup of our government to 41. Many of these seats involved women—more on that below.

Donald’s ethics disclosure released Wednesday listed money reimbursed last year to Michael Cohen, who paid off Stephanie Clifford (Stormy Daniels) for her silence. Donald’s recent statements (along with those of diarrhea-mouthed Rudy Giuliani) that he did indeed pay Cohen back for paying Clifford were an attempt to clear him of campaign finance violations—and they indicate that this repayment was for that purpose. Which interestingly opens up a new ethical and legal can of worms, as he didn’t disclose it earlier, and lied about it before.

The Office of Government Ethics filed a letter with Rosenstein, deputy AG for the DoJ and in charge of Mueller’s Russia investigation, alerting Rosenstein to the payoff as a debt that may be relevant to “any inquiry” the DoJ is pursuing. 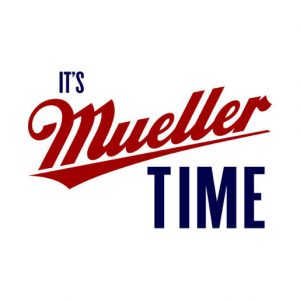 Wonder which one they mean? Former White House ethics czar and unlikely superhero Walter Shaub says the letter is “tantamount to a criminal referral.” (BTW, if you aren’t following Shaub’s Twitter account, you should be.)

Grassley released thousands of pages of the Trump Tower emails.

Mueller has subpoenaed the social media expert for one of Donald’s chief advisers in the 2016 campaign, Roger Stone.

Cohen solicited the government of Qatar for $1 million for access to Donald’s incoming administration in late 2016—in other words pitching the sale of influence on our government to a foreign power.

Three months before the 2016 election, Donald Jr. and several other Donald aides met with a Middle Eastern emissary offering them help in winning the election for Donald. Don’t worry…Mueller’s on it.

A federal judge denied Paul Manafort’s bid to have Mueller’s indictment of him dismissed—for the second time—calling Manafort “an obvious person of interest.”

Manafort seems to having his own karmic smackdown, as his former son-in-law has decided the time has come to plead guilty and cooperate with Robert Mueller. Know what time I mean? I think you do…

The Law Against Republicans

A district judge in Seattle had to actually forbid the federal government from continuing to state that a Mexican man ICE is trying to deport has gang ties—because they have presented zero evidence of it. While he was at it the judge forbade ICE to revoke the man’s work authorization or DACA enrollment. Thank god for the judicial branch—it’s the only grown-ass adult in the room at the moment.

Oh, wait, the UN is also an adult—the General Assembly voted 128 to 9 to declare Donald’s recognition of Jerusalem as Israel’s capital null and void, a sharp (and humiliating) rebuke to the man-baby in chief.

Good old California, along with 18 other states, filed papers in support of a lawsuit filed by multiple Planned Parenthood branches to prevent the federal government from blocking funding for family planning services.

The Justice Department as well as the FBI are investigating Cambridge Analytica. The whistle-blower who first alerted about the company’s privacy law violations has testified that CA dictated that only Republican causes and companies were to be accepted.

An executive at Novartis, the drug company that paid Donny’s embattled lawyer Michael Cohen $1.2 million for possible access to and sway with Donald, has resigned. He seems be taking a page from Donald and to erroneously believe this will put a stop to any further investigation.

The White House eliminated the top cyber policy post, saying they wanted to “streamline authority.” Hmmm…why could Donald want to get rid of experts in cybersecurity and shorten the chain of command of those responsible for stopping it?

Betsy DeVos’s education department is dismantling a unit responsible for investigating fraud at for-profit colleges (like Trump University, and also schools where some of DeVos’s top hires in the department formerly worked).

EPA head Scott Pruitt—among many other ethical and potentially legal violations—sought to block publication of a nationwide water contamination crisis regarding a class of toxic chemicals that has contaminated water supplies near sites across several states, citing concerns about “a public relations nightmare.”

A former Trump campaign aid is helping a Russian firm owned by a Russian billionaire with close ties to Putin avoid U.S. sanctions.

Donald named the entirely unqualified and inexperienced brother-in-law of Senate majority leader Mitch McConnell and his wife, who is also transportation secretary, Elaine Chao, as head of a Labor Department agency responsible for paying back dissolved pensions. Please reread that sentence and remind yourself this is happening in the U.S., not a nepotistic banana republic.

China—which was just given a bye on sanctions for a major cell phone company and a tariff exemption by Donald—is offering a $500 million loan to a state-owned Indonesian amusement park that will feature three Trump-branded properties.

Gina Haspel, Donald’s embattled CIA nominee who was directly involved in torture of POWs, recanted and finally stated torture to be wrong. Just in time for the vote on her confirmation (which went through).

In about as clear an indication yet of the banana republic regime Donald would like to be leading, he directly tried to coerce the postmaster general into doubling shipping rates for Amazon—the company headed by his archnemesis, Jeff Bezos, who also owns the Washington Post. The postmaster, Megan Brennan, pushed back and attempted to educate the president of the United States about the law and democracy, informing him that those rates are bound by contracts and changes would have to be reviewed by a regulatory commission.

Former Austin police chief Art Acevedo posted a no-holds-barred status on his Facebook page after the Santa Fe school shooting, stating, among other direct rebukes of politicians’ inaction in the face of NRA money, “This isn’t a time for prayers, and study and inaction, it’s a time for prayers, action and the asking of God’s forgiveness for our inaction (especially the elected officials that ran to the cameras today, acted in a solemn manner, called for prayers, and will once again do absolutely nothing).”

Women won the living crap out of some primary elections. In Pennsylvania, a state with exactly zero female representatives in Congress, twenty women ran on the democratic ticket in the primaries in PA, and seven will be on the ballot in November. Women won 16 of the 19 House Democratic primaries, eight black women won primaries, and in four states (Indiana, North Carolina, Ohio and West Virginia), women won 63 percent of the primary nominations.

The Texas Commission on Law Enforcement reversed an earlier decision to offer continuing education credits for a course taught by an ex-FBI agent based on a conspiracy theory that Muslim groups want to overthrow the U.S. government and implement Islamic law, in which he calls Islam “barbaric and evil” and dark-skinned airport security workers “jihadists” and “terrorists.” The commission revoked the credits it had given members for the course.

At a Coffee Bean & Tea Leaf in California, a barista refused to serve a man making racist comments to a Muslim patron—and her bosses backed her up. (Starbucks: Take note. The coffee giant had yet another racist incident this past week when a barista wrote “Beaner” on a cup instead of the patron’s name, Pedro.)

Lawyer Aaron Schlossberg—whose very public racist rant against employees speaking Spanish in a restaurant went viral—is experiencing the great karmic bitch-slap of life: hiding from the press, dealing with a rash of bad reviews on his firm’s Yelp page, and probably looking at the end of his career. He’s also the target of a complaint filed with the state court disciplinary system for misconduct for the rant. In true I <3 NY style, New Yorkers held a fiesta outside his apartment building, and an online campaign raised money to hire a mariachi band to follow him around and play for him.

Nobody in the private sector seems to want to hire anyone who worked for Donald.