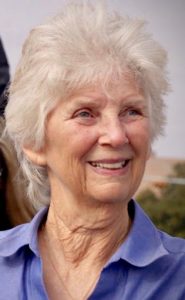 Karen Collins is everywhere. She’s on an I-35 overpass holding a “Repeal and Replace Ted Cruz Banner” (copies of which she has sent to activists all around Texas). She’s counter-protesting Nazis. She’s attending civil-disobedience workshops. She’s registering voters at candidate forums. She’s blockwalking. She’s organizing in the Indivisible Rosedale Huddle.

Karen is also the subject of the short film, “Liberty Hill,” which debuted at SXSW and was directed by another Indivisible organizer, Katie Graham. And recently, she received a standing ovation at one of the Austin Town Halls for Our Lives.

Karen Collins was earning her master’s degree at the University of Texas the same year Charles Whitman opened fire from the UT Tower, killing 14 people and wounding nearly three dozen on Aug. 1, 1966. On Sunday, she held the crowd in thrall as she painted a grim picture of that day.

Collins commended the students for trying to force congressional action.

“I want you to run for office as soon as you can,” she said to wild applause and a standing ovation.

For many students who are still under voting age, they must first turn 18 and register. And for Kappelman, that day is today.

“You can expect a new voting bloc to come out of this movement,” he said.

We are privileged to know Karen Collins. She gets more done in a day than most of us do in a week, and she does so with energy, enthusiasm, and good cheer.

I trusted that our democratic institutions (like fair elections and rule of law) were strong. Didn’t you? And then came 2016 and alarm bells went off. Election— shock—depression and then I got mad which upped my energy level. But what could just one person do?  My first action was to donate to reputable media and to organizations with lawyers to FIGHT IN MY PLACE.

But then I found the Indivisible Guide. Ah ha! I stopped looking for someone else to defend me and the country and values I revere. It’s my job, too, as a citizen, and this little old lady has turned into a flaming activist! And, oh joy, I discovered in the Women’s March that I have millions of like-minded companions.

An American President lying, threatening, bullying, cheating, subverting our system of government is THE ISSUE about which I’m most passionate.

Daily attacks by this historically corrupt administration challenge me every morning to figure out what more can I do to fight.

One step at a time, some action everyday (just a postcard or a banner drop maybe), enlarging my circle with new allies, reading and thinking. These keep me from being overwhelmed. 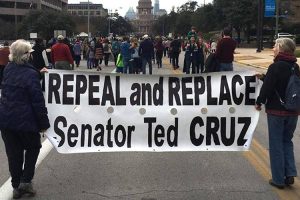 Assuming you are not a paid protester, what is your day job?

What advice do you have for people who want to get involved?

You are in control. Don’t wait for somebody else. Inspire yourself by READING and THINKING and PLANNING. Step out of your normal routine and circle of friends. Try to think out of the box. Recognize new allies and be a good ally. Think and plan for the long haul. WE CAN DO THIS.