Vote in the 2018 Primaries on Tuesday

If you didn’t vote early, make sure you vote this Tuesday, March 6th. View our voter resources page for more information about candidates and polling locations. And be sure to send us your “I Voted” selfies on Facebook, Twitter, or Instagram!

While gun control remains in the national spotlight, not one piece of federal legislation has passed or even been debated. Not even Sen. John Cornyn’s “Fix NICS” background check bill, cosponsored by Sen. Chris Murphy (D-CT), has come up for debate.

Now the GOP-led Congress wants to move onto other topics, like infrastructure and banking. Don’t let this happen. Call Cornyn, Cruz, and your House representatives and tell them the time for common-sense gun control is NOW.

Today is the DACA cliff. Fight back with United We Dream!

Monday, March 5th, is the arbitrary deadline that Trump gave Congress to pass a permanent solution to benefit the millions of undocumented youth and young adults who qualified for DACA. Without it, thousands of recipients will lose their protections every day–beyond the 122 per day already being exposed to deportation. Join United We Dream from 5 to 6:30 p.m. at Woolridge Park, 900 Guadalupe St.

Read more from the National Immigration Law Center on the latest DACA ruling in the Supreme Court, and what happens next >>

Rep. John Carter continues to ignore the crisis in his backyard

If you live in TX-31, call John Carter and demand that he join his colleagues in calling for an investigation into the treatment of sexual abuse allegations at Texas detention centers, and an expedited audit to assess compliance with the Prison Rape Elimination Act (PREA) at the T. Don Hutto Detention Center.

Read more from Grassroots Leadership about the effort for #FreeLaura >>

Send Out the Clowns! 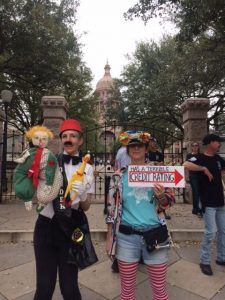 Participants in the second annual “March 4 Trump” in Austin were met with the scariest form of resistance imaginable: clowns.

Calling themselves the LOLt-Right Marching Band, these clowns showed up with costumes and kazoos to confuse and roast the Trump supporters. Fun fact: these clowns were trained in nonviolent, de-escalation tactics to help people channel their energy in safe and affirming ways in the face of hatred.

You can follow these clowns’ shenanigans on Twitter: @loltrightband. And support the Clown Resistance through their GoFundMe page.

Over the past year, activists from ADAPT have been on the front lines in the fight to save the ACA and Medicaid. Activists from the ADAPT of Texas chapter are a frequent sight at protests around town, fighting for their civil rights–and yours.

ADAPT’s mission is to “adapt” fights to free our people from nursing homes and other institutions.  They work for more accessible communities: including transportation, housing, public accommodations and governmental buildings and programs.  They believe the lives of people with disabilities should be valued.

Goat out the Vote, courtesy of Sunflower Farm Creamery: