Our next conference call is on the night before the full Texas House votes on SB4, the “Sanctuary Cities” bill. We are lining up guest speakers, including Jose Garza of Workers Defense Project and Chris Valdez and Karla Perez Ramirez of United We Dream. Watch this space for more detail.

Karla is the statewide coordinator for the United We Dream UndocuTexas campaign and a beneficiary of DACA. She is a second year law student at the University of Houston Law Center and Board member of United We Dream. English/Spanish.

Chris works with United We Dream on Texas communications, is a court-appointed special advocate through Child Advocates in Harris County and is based in Houston. English dominant/Spanish proficient. 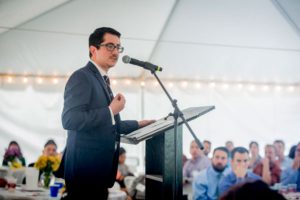 Jose Garza is Executive Director of the Workers Defense Project. Jose, who started at WDP in January 2016, is a native Texan who has devoted his career to the fight for working families and immigrant families. His homecoming to WDP is inspired by a “deep belief that this state can be a place where working families can get ahead.” (Barragan, AAS)

Jose started his career in Washington, D.C., where he worked for Congressman Ciro Rodriguez, attended law school at Catholic University, and worked for a federal district judge. He returned to Texas for the first time in 2006 to work on the border as an assistant public defender at Texas RioGrande Legal Aid, and then as an assistant federal public defender in the Western District of Texas.

In 2010, Jose returned to Washington, D.C. to serve as the Deputy General Counsel for the House Com­mit­tee on Education and Labor. He went on to work as Special Counsel to the National Labor Rela­tions Board, and most recently he served Secretary Tom Perez as a senior policy official at the U.S. Department of Labor. Garza brings extensive experience working with local, state and national labor organizations to build opportunity for working families and immigrant families.