Support Jimmy Flannigan and Alison Alter in the runoff elections

We have just two week until the December 15 runoff elections, and Jimmy Flannigan and Alison Alter need your support fending off far-right challengers. There is always a massive dropoff in voter turnout between general elections and runoffs, which allows a very small group of people to determine the outcome. It is imperative that voters in Districts 6 & 10 show up to vote, and that the rest of us support the incumbents in every way we can.

Georgia: Do your part to take back the Senate

Both Senate seats in Georgia head for runoff elections on Tuesday, January 5. Below are some organizations dedicated to flipping Georgia and taking back the Senate.

Even in this stretch of uncertainty, there are still lots of things you can do to help us win the Senate, continue to push for progressive wins in the House, support the Biden transition, and get ready for some hard but defining fights in the waning months of this Congress.

Why We Need a Progressive Voting Block

One important way progressives in the House can grow and use their power is through the use of a voting bloc. A voting bloc is a group of Members large enough to stall or stop harmful legislation by committing their votes together as part of negotiations. By creating a bloc and executing it strategically, progressives can force leadership to listen to their demands and win key victories.

How we Build a Progressive Biden Administration

Joe Biden is our President-elect, but our work is just getting started. In the Executive Branch, personnel is key to getting any of a President’s agenda enacted. If we want to see significant progressive change, it starts with President-elect Biden appointing progressive leaders to his cabinet and to key administrative positions.

The House of Representatives operates under a set of rules that they vote on at the beginning of each Congress. Some of those rules make it harder to pass progressive legislation. Most provisions of the package of rules that the House will pass are relatively non-controversial and set the requirements for things like the congressional schedule, how Congress will keep records, and how Members of Congress can use their office funds. However, there are two provisions that present a barrier to progressive legislation: the “Motion to Recommit” (or “MTR”) and the “Pay as You Go rule” (or “PayGo”).

We did it! On January 20, Joe Biden will be inaugurated as the 46th President of the United States, ending Trump’s disastrous four years in office. We worked hard for this. We called, we texted, we protested, we held town halls, we birddogged, we organized. But we know that even with Trump on his way out of the White House (ridiculous lawsuits notwithstanding), our work isn’t over.

12 p.m. Join Stephanie Swanson, LWVTX’s Redistricting Issue Chair, and Joaquin Gonzalez, Staff Attorney with the Texas Civil Rights Project, for an update on what’s happening on redistricting in Texas and what to expect in the upcoming session of the Texas legislature.

RSVP for the refresher 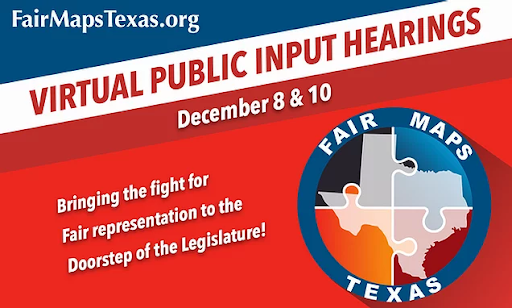 The purpose of these hearings is to solicit public input about a region’s unique geographic and demographic characteristics from those residents most familiar with their own neighborhoods as well as ways to improve the upcoming redistricting process. This testimony is meant to provide context to the 2020 Census data and assists the Legislature when it draws district boundaries, so that district lines are drawn to keep your community whole and grouped with nearby communities with similar interests.

Everyone in the state is invited to participate during both hearings.

Local State Legislators will be invited to attend.

Read more and sign up at Fair Maps Texas

Build your ballot on VoteTravis.com

Guide from League of Women Voters