Join us for six nights of live readings of the Mueller Report. Begins Friday, June 28. Details below.

(Much credit to Celeste Pewter)

Trump is treating his border crisis like a game: He announced sweeping ICE raids in 10 cities, and then hours later announced a two-week delay, demanding that Congress find a solution. We all know he does not operate in good faith. Celeste Pewter (of 2020Senate) says:

He just wants it to make it seem like he’s being reasonable, so at the end of two weeks, he can say:

– Look, I tried and Congress failed, so let’s carry out the raids, and

– Doesn’t Congress suck at doing their job? Drain the swamp, reelect me, etc.

It’s manipulation via Tweet, and frankly – all media outlets should cover it as much, and electeds should call it out too.

Congress is in fact voting on DHS funding this week. This is money that Trump can use to expand his detention and deportation machine. They need to hear from us that children’s lives are not a game, and that no additional money for enforcement be included in the bill.

Write your reps: No additional funding for immigration enforcement

Tell your reps to support the study of reparations for slavery

It’s hard to believe it was only last week when, in observation of Juneteenth, Ta-Nehisi Coates testified before Congress on the need for reparations to address the sin of slavery in the United States. Five years ago Coates wrote the seminal piece on reparations. Now there is a bill in Congress—H.R.40 – Commission to Study and Develop Reparation Proposals for African-Americans Act—which has 67 cosponsors, all Democrats, four of them from Texas. Call your reps and ask them to support this bill.

In the video below, Coates directly addresses Senate Majority Leader Mitch McConnell’s complaint that “no one alive” owned slaves.

"Enslavement reigned for 250 years on these shores. When it ended, this country could've extended its hallowed principles — life, liberty and the pursuit of happiness — to all, regardless of color," writer Ta-Nehisi Coates told Congress. "But America had other principles in mind" pic.twitter.com/a1RYYhbSnq

Join the Healthcare Activist Leadership Network to build power for 2020

Are you mad that the lege did nothing significant about healthcare this session? Indivisible Austin has endorsed a new campaign to fight for expanded healthcare access in Texas. This statewide coalition of advocates is looking for individual healthcare champions to build a grassroots network of like-minded activists that spans the state. We want lawmakers and 2020 candidates at every level, in every district, to know that when we vote, healthcare is going to be the deciding factor.

Learn more and nominate yourself or someone else to join

Voting rights advocates are pushing back with a National Day of Action to demand that Congress restore voting rights protections by passing the Voting Rights Advancement Act (HR-4). 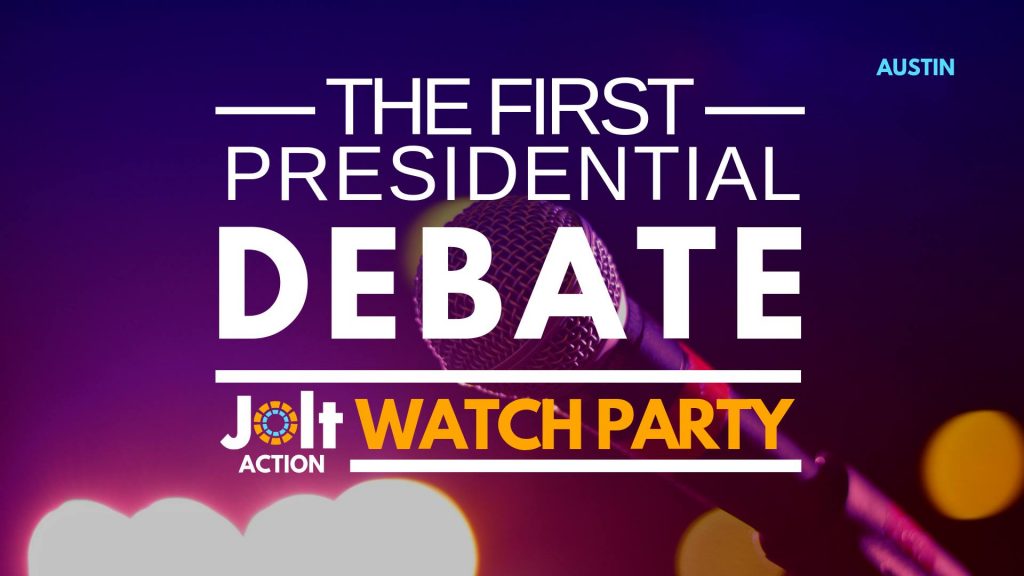 Join Indivisible Austin and Jolt Action for the First Presidential Debate watch party of the 2020 Election. We will be streaming the full Presidential debate LIVE. Come watch, witness, and prepare to vote.

Friday, June 28 and then Sundays through August 11 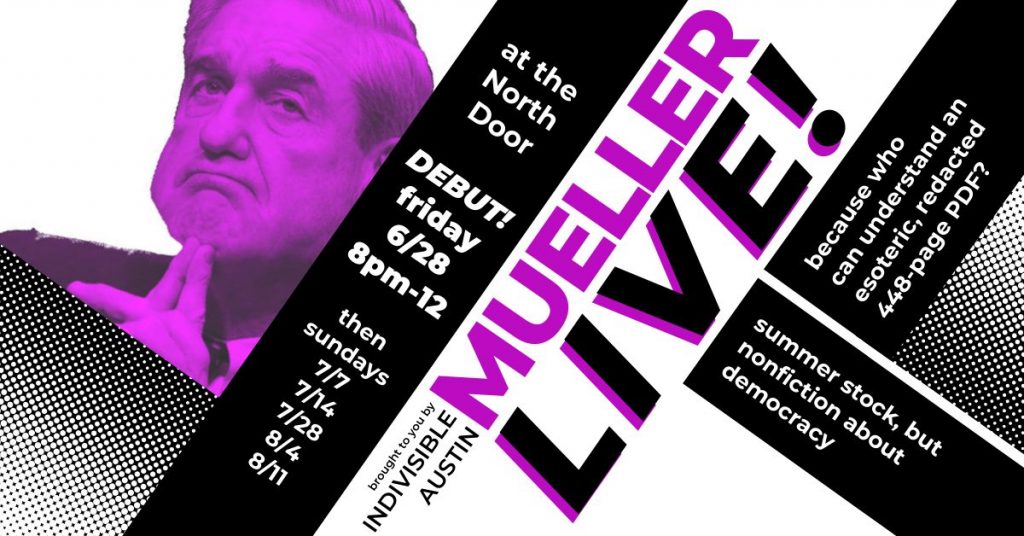 Indivisible Austin and North Door present a live reading of the Mueller Report, starring local actors, musicians and other ne’er-do-wells.

How are Central Texas congressional candidates responding to Trump’s deportation force? Below are a few examples. If you’re on Twitter, subscribe to this list of candidates.

We've learned that CBP isn't allowing donations of toothbrushes and soap, but our team is working on a solution.

Ok, it’s go time folks. My friend @HeidiLiFeldman is helping to coordinate people who can go to Clint to demonstrate outside these #ConcentrationCamps and those who are able to financially support them. You’ve asked what you can do. Now DO IT. https://t.co/lPOmccapGv

We are in discussions with communities on the ground in El Paso – many of whom were active in our last march in Tornillo. We will have a date for a major demonstration in front of the detention center in Clint, TX soon. Then, we organize. We witness. We march. @HeidiLiFeldman

We truly are in a struggle for the soul of this country. #NotInOurName https://t.co/G0ASx6RWcG

Where does this admin get the right to treat legal asylum seekers or anybody this way? There are laws and international treaties. Time for Congress and America to make a stand! https://t.co/FN9pSXLsYo

We’ve hit another one of those moments where the “normal” deluge has turned into an absolute maelstrom. Holding children prisoner in abysmal conditions, toying with war with Iran for political gain, disgustingly rampant corruption, and even more horrendous personal allegations of assault.

Our only way out is to go through, together. It sounds trite, but it’s the only real cure for that feeling in your stomach. We can and will change things by:

Support Indivisible Austin. Together, we will make it through and change the world along the way.

Raccoon on a scooter, I know, I know, it's serious.