A lot has changed since last week, when the Texas Secretary of State issued an advisory that drove Ken Paxton, Greg Abbott and even Donald Trump into a froth of voter-fraud-conspiracy theorizing.

To recap: Texas officials flagged 95,000 voters for citizenship reviews. Now their entire case appears to be falling apart. The vast majority of people on the list likely registered to vote after becoming naturalized citizens. But unless the SOS rescinds the advisory, every county in Texas is expected to commit resources to checking the citizenship status of people on the list. Some counties have already sent out letters. This is a tremendous waste, considering that in Florida, where the same methodology was used, only 0.0005% of the cases proved actionable.

Highlights from the letter:

“The Advisory explains that you compiled this list of potential non-citizens by relying on documents that Texans submitted to DPS “indicating the person is not a citizen of the United States at the time the person obtained a Driver License or Personal Identification Card” (emphasis added). Using such a data set to review the current citizenship status of anyone is inherently flawed because it fails to account for individuals who became naturalized citizens and registered to vote at any point after having obtained their driver license or personal identification card.

“The methodology your office apparently employed to identify such voters looks deeply flawed, and its origins and intent are highly suspect…

Here are additional contacts in case you can’t get through.

You can also report fraud on the State Auditor’s website. Why not!

From the national Indivisible Project:

Things are still a bit quiet at the #txlege. The legislative calendar is a little bit arcane, making the first month of the session quiet. But things are starting to heat up, and soon our lawmakers will be holding hearings on hundreds of pieces of legislation.

Here’s a quick reminder of the committees our area House and Senate members sit on.

The big upcoming hearings this week are in the Senate Finance committee. Our area Senator Kirk Watson is a member of Senate Finance. Starting on Monday, Feb. 4, Senate Finance will start hearings on various parts of the budget organized by Articles of the General Appropriations Act (here’s the 1,000-page GAA aka budget for 2018-2019). These hearings include both invited testimony — given by individuals, agencies, advocates, etc. that the committee invites — and public testimony, which anyone can give, provided they have three minutes and potentially unlimited time to wait around or 40 copies of written testimony to leave behind.

While all parts of the budget are significant, we want to call particular attention to the hearings Tuesday and Wednesday on Health and Human Services (including Medicaid, mental health, children’s health, maternal health and mortality, and more).

Senate Finance will meet on Tuesday at 1 p.m. or upon adjournment and at 9 a.m. on Wednesday in E1.036

You can watch the hearings live online at this link, and you can watched past hearings here.

Keep an eye out for the governor’s State of the State which is happening on Tuesday, Feb. 5 in theory. We saw an announcement about it last week, but have seen nothing since. 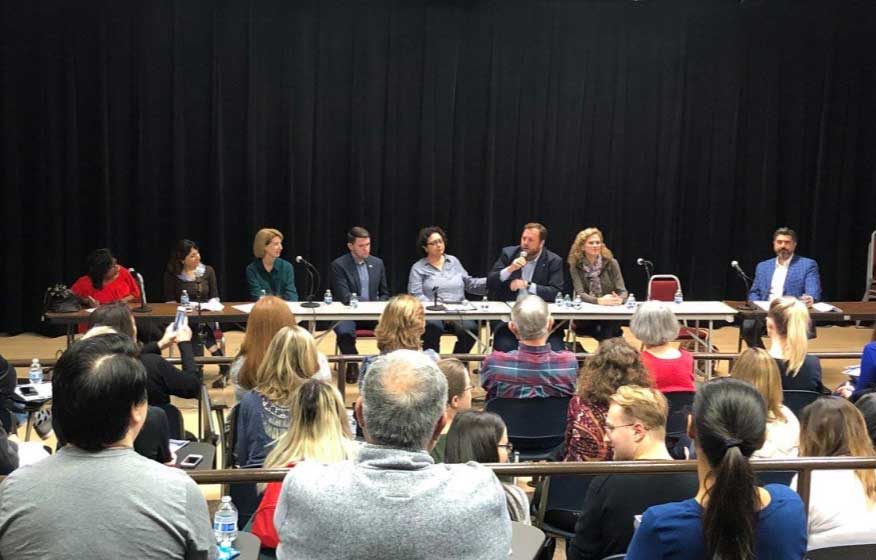 We’re gearing up for grassroots at the lege. Get involved!

Rep. Lloyd Doggett was on CNN last week and made clear there would be no wall money in any agreement with Trump. He also went after Trump’s lax attitude toward Russian aggression and laid out a plan to get Trump’s taxes through the Ways and Means committee, where Doggett is a senior member.

Meet the 86th: A Conversation With New Democratic Members of the Texas House

These trainings will appoint you as a VDR for the 2019-20 election cycle and will allow you to register residents in Travis County through December 2020. Travis County Community Hall at Oak Hill, 8656 A West Highway 71, Bldg A Ste 208

Did you learn a lot at our Indivisible #TXLege Training in December but still aren’t sure what you can do to get our legislators to listen to us and pass or block bills? Then join us Tuesday of next week for our second ever General Body Meeting Tuesday. We will build off of our #TXLege training to equip you with the knowledge and skills necessary to walk into any legislator’s office and actually change our state’s laws! Snacks will be provided. Location TBD but likely Central Austin.

This should make your day a little happier. pic.twitter.com/GIVaWra9zQ