Call Cruz and Cornyn about…

The shutdown and border wall

That is the message our senators are telling President Trump over the stupid, unworkable border wall. Cruz and Cornyn joined the president last week in McAllen, and pretended that they hadn’t just spent two years fully in control of the government. Instead they now blame Democrats for failing to fund “border security.” This is all such a sham that it’s hard to even write about. But people are suffering and it’s important to make our voices heard.

You can also write a letter to the editor about the shutdown.

Intervening on behalf of the Afghan interpreter currently detained in Houston

An Afghan interpreter—who assisted U.S. troops—and his family were detained at Houston’s George Bush airport and threatened with deportation. The given reason was that they had opened an envelope of paperwork that was supposed to remain sealed. The interpreter’s family has been released, but he remains in custody, and all of the privileges afforded their refugee status—including their visas—have been revoked.

On Dec. 24, John Cornyn tweeted a link to a Daily Caller article with the headline “Afghan And Iraqi Interpreters Risk Death, Wait Years For Legal US Visas While Migrant Caravan Demands Immediate Entrance.”

If Sen. Cornyn is serious about his support for Afghan interpreters, he should join Reps. Al Green, Sheila Jackson Lee, Joaquin Castro, and Lloyd Doggett to intervene and correct this injustice.

Call your House rep about…

HR 339 has 30 cosponsors (none from Central Texas, though!) and should proceed to a vote. This letter from Sen. Chris van Hollen (D-MD) has some good language to borrow when you call.

If you are in TX21—Chip Roy’s district…

Rep. Chip Roy was one of one of only seven Republicans who voted No on providing back pay to furloughed government workers.

The new Democratic majority in the House…

Enjoy the latest posts on senatorjohncornyn.com: 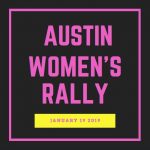 Indivisible Austin will have a table at the annual Austin Women’s Rally, which takes place at the Capitol from 2 to 5 p.m. This rally is for the general public to gather in support for women, in their fight for equality and equity. This rally is an expansion upon the annual Texas Reproductive Rights Rally, as it coincides with the date of that event.