Call Senators Cornyn and Cruz about…

Trump says he could keep shutdown going for “months or years.” Call Cornyn and Cruz—especially Cornyn, since he is up for reelection in 2020—and ask if they’re really okay with federal employees being unable to pay their bills. Ask how they feel about the negative impact to the economy. And then ask if a stand-off over a wall is really worth this type of damage. Remind them contractors generally don’t get back pay during a shutdown. Remind them that the GOP has been in power for two years and couldn’t fund Trump’s ridiculous wall, so there is no way the House Dems will do it. Tell the senators to stop playing games with people’s livelihoods. (Major hat tip: Celeste Pewter.)

DHS hearings on the deaths of children in custody

Both John Cornyn and Ted Cruz are on the Senate Judiciary Committee, where fellow committee member Diane Feinstein has called for a hearing after two children died in the custody of Customs and Border Protection.

It seems Big John, who took $1.6 million from the oil & gas industry in 2018, just doesn’t feel like climate change is much of a priority. The editorial board of the Houston Chronicle published this brutal take-down of John Cornyn’s sudden adoption of climate-change denialism. (Read our analysis over at senatorjohncornyn.com—and be sure to share it with him on social media; he’s unusually thin-skinned there.) Give him a call and let him know you support the Green New Deal, and expect him to get onboard or be voted out of office. Meanwhile, you can thank Rep. Lloyd Doggett for supporting the deal.

Call your House member about…

Call your House rep and tell them to support HR1, the landmark bill that would expand voting rights, curb gerrymandering, bolster ethics rules, and revamp how campaigns are funded. The Democratic-led House introduced this bill last week, partially in response to hundreds of grassroots groups rallying for its support. Protecting democracy is nonpartisan—tell your GOP rep to get onboard!

First day of the Texas Legislature

Join newly minted Central Texas reps for their swearing in ceremonies! The House gallery opens at 10:30 am and is open to the public on a first come, first serve basis. The ceremony begins at noon. Overflow rooms are available. You can also visit staff offices, where receptions will be held both before and after the swearings-in.

Action Spotlight: Whose House? Our House! 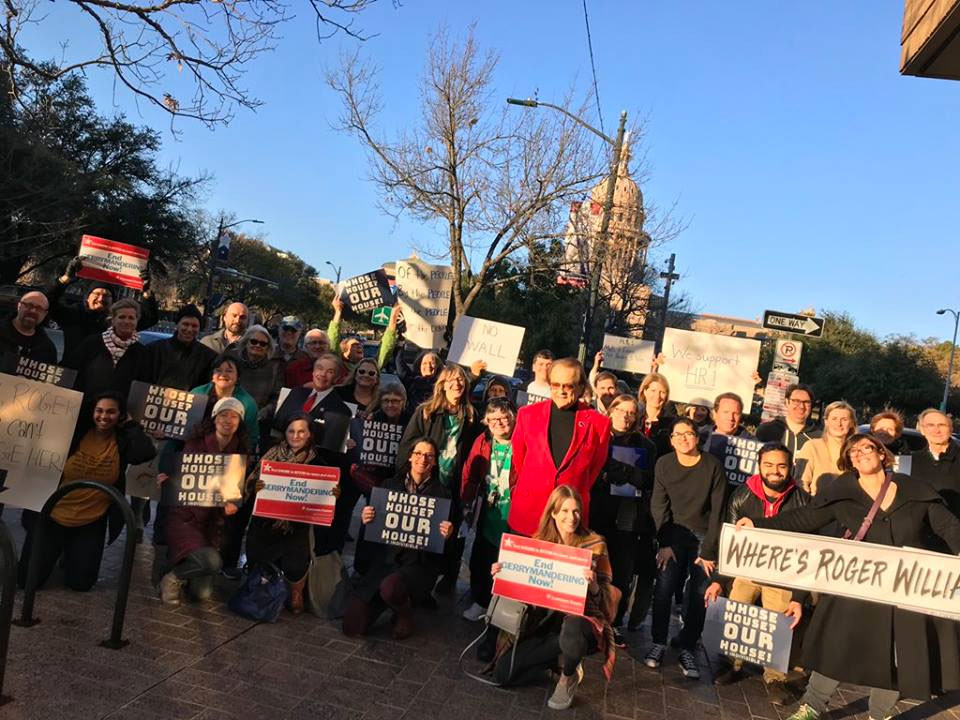 Organizers from Indivisible groups in TX25 staged a “Whose House? Our House” rally outside the offices of Rep. Roger Williams. The event centered around support for H.R.1, a robust democracy reform bill including reforms on voter empowerment and access, money in politics reforms, and corruption fixes. The dazzling lineup of speakers included:

Props to Indivisible TX25 East Austin and all of the local candidates and activists who participated!

"What a rollercoaster of character development!" pic.twitter.com/7tpPQLKfVG