You voted. Now be a voter multiplier.

We have an uphill battle: gerrymandering of our House districts, voter intimidation and suppression, old and buggy technology—all contribute to the likelihood of losing on Tuesday.

Chances are you have already voted. So now your job is to be a voter multiplier by finding friends, family, neighbors and even strangers and convincing them to vote. And if you haven’t already voted, polls are open on Tuesday from 7 a.m. to 7 p.m. Travis and Williamson County voters can vote at any polling location.

Get more 2018 midterm resources to share with friends and family >>

Spend an hour on Election Day calling other Texas voters

We’re contacting 3,000 Texas voters to get out the vote. You can call from home, from work, from wherever you are comfortable. If you’ve phonebanked with us before, follow the first link for instructions on logging into OpenVPB. Otherwise, follow the second link to connect to the national Indivisible team’s phonebanking tool, which includes Texas races.

How to persuade people to vote

You’ve already voted, right? RIGHT? So now you can be a VOTE MULTIPLIER by asking friends and family to vote. Go through your phone’s contacts and pick at least three people to remind about Election Day. Don’t worry about being annoying. All will be forgiven after the elections.

We asked on Facebook what others have found to be persuasive and got some great responses:

“I’ve been texting them (including neighbors) all conversationally, asking if they’d voted, and sending them a list of their polling places. The more you ask, the more social pressure they have to do so. So far it’s working!”

“One friend was hesitant because she didn’t feel well informed enough to vote. We directed her to some resources that the local papers put out with candidates/positions/bond props so she had a source to do some research.”

“If anyone in your family is around my age, you may soon be taking care of them. Without Medicare, you’re it.”

“I don’t know if it’s helping, but I have other mom friends and have been offering to babysit while they go to the polls. No one has taken me up on it yet, but I hope at least it’s a gentle reminder to vote!” 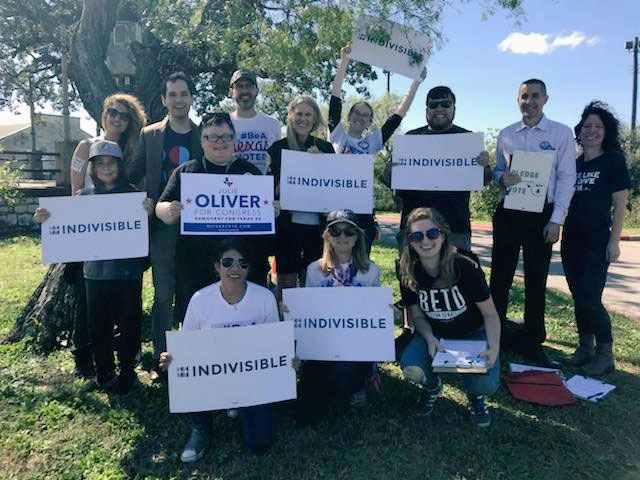 Our canvassing team with Indivisible’s co-executive director Ezra Levin (back, left, sporty jacket). Turnout levels across all demographics have been extraordinarily high. But don’t get complacent.

We will NEVER give up, and we can always do more, but doing more—before the election and after—means more food for volunteers, more printing, and more events.

To do more, we need more support, your support. Be an Indivisible Austin supporter today.