Lives Depend on Your Vote

Last week, a Trump zealot in Florida mailed pipe bombs to prominent Trump critics, including Jewish investor George Soros, and on Saturday a gunman walked into the Tree of Life Synagogue in Pittsburgh and murdered 11 worshipers on Shabbat. The gunman believed the fake, yet very mainstream, rumor that refugees fleeing violence in Central America is a Jewish conspiracy.

White supremacy and anti-Semitism are deeply intertwined. When right-wing marchers openly chanted “Jews will not replace us” in Charlottesville, and our own elected politicians send fearmongering fundraising emails about “globalist George Soros,” it becomes inevitable that someone would commit hate-fueled violence. This hatred against Jews is the same hatred that fuels attacks on Muslims, immigrants, African-Americans, the LGBTQ community, and other vulnerable groups.

These are deeply dangerous and troubling times, made vastly worse by a President who lacks any empathy or ability to act outside his own self-interest. This week, and on Tuesday, November 6, we can bend the arc of history closer to justice.

(1/2) The horrifying acts of terror in Pittsburgh hit close to home for me, as I am Jewish. We should all be shaken to our core by this latest hate crime, one more of too many.

(2/2) We must confront hate, in every form, at every venue — including the ballot box. My heart and prayers are with the victims, the families directly suffering, all of the worshippers and the law enforcement officers that bravely responded. #Pittsburgh #TreeOfLifeSynagogue

Why are Texas voting machines switching votes and what can you do about it? 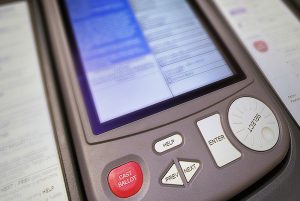 If you’ve voted in Travis County, you are familiar with the voting machines that bear more resemblance to rotary telephones than to any technology currently in use. Those machines have been buggy in the past few elections, and this one is no different—except that there is massive national attention on the race at the top of the ticket between Beto O’Rourke and Ted Cruz.

Zenén Jaimes Pérez of the Texas Civil Right Project explained to GQ that “for nearly two decades, Texas has relied on Hart eSlate voting machines, which look sort of like giant PalmPilots and are manipulated using a selection wheel and an ENTER button. Manipulating both of these things at the same time, it seems, is what can lead to unintended and very unwanted results.”

Thanks in part to the Texas Civil Rights Project’s petition campaign, the Texas Secretary of State issued further guidance for how to ensure your vote is counted properly.

Read more detail from TCRP and the Texas Secretary of State >>

If you’ve been sitting on the sidelines, now is the time to suit up. We need you. Texas needs you. And if you’ve been canvassing, phonebanking, texting, dragging friends across broken glass to the polls—thank you. Let’s redouble our efforts through November 6.

Indivisible Co-Executive Director Ezra Levin will be here to canvass with us! 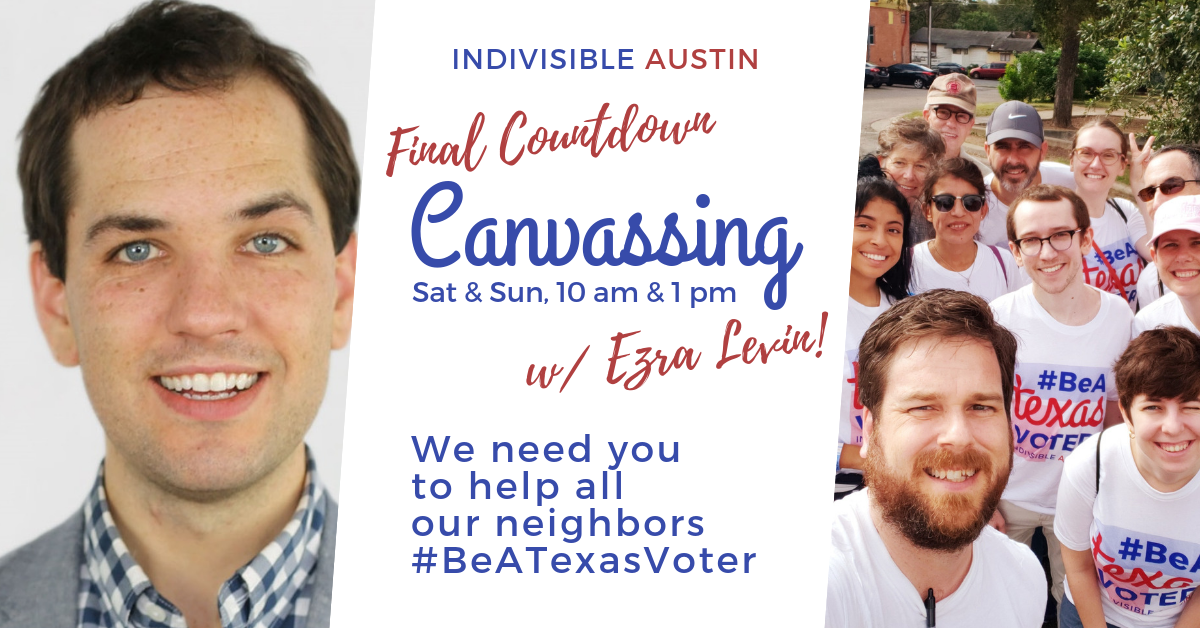 RSVP to Canvass with Ezra and other GOTV activities >>

You may be excused if you’ve forgotten that open enrollment for HealthCare.gov insurance plans starts on Thursday, Nov. 1 given all the election excitement. As a movement we spent nearly a year fighting to stop the repeal of the Affordable Care Act, and we succeeded. Despite ongoing attempts to sabotage the ACA, insurance plans and financial help to pay for them are still available for 2019 just as they have been for the last 5 years.

Yes to Pale Ale, No to Baby Jail

Children’s Defense Fund-Texas is hosting a “comment party” where you can swill beer (or a soft drink) and submit comments about the Trump Administration’s proposed rule to end the Flores settlement and allow indefinite detention of children.

We’re rounding up quotes from our elected leaders in response to the multiple assassination attempts on prominent Trump critics. They usually follow the same formula: Issue bromide about how all violence is bad, and then pivot to complaining about unruly mobs on the left.

See quotes from Cornyn, McCaul, and Williams on our website >>

This picture of a crow is interesting because…it's actually a cat pic.twitter.com/dWqdnSL4KD

We will NEVER give up, and we can always do more, but to do more, before the election and after, means more food for volunteers, more printing, and more events.

To do more, we need more support,  your support. Be an Indivisible Austin supporter today.