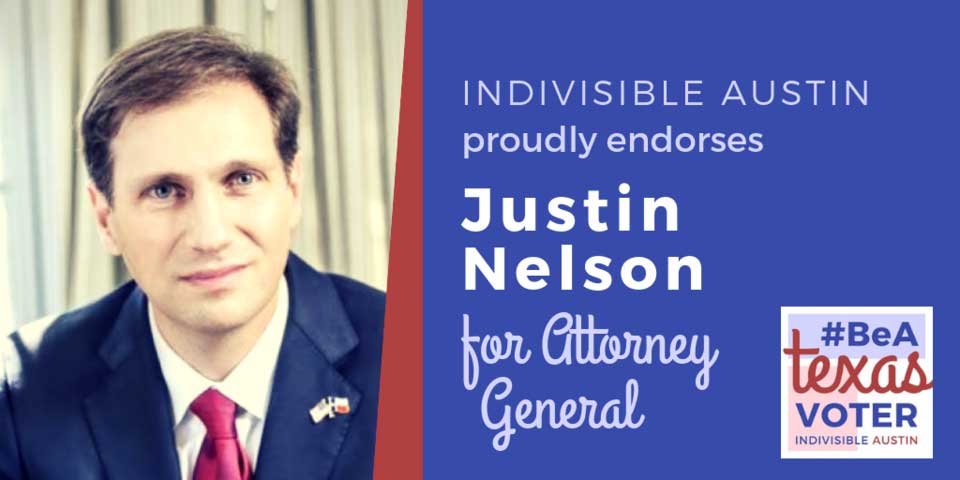 Indivisible Austin is proud to endorse Justin Nelson for Texas Attorney General. Nelson’s campaign has brought serious focus to issues that matter to Texans—and to the serious ethical malpractice committed by the incumbent. In this race, running against indicted Attorney General Ken Paxton, ethics is a serious issue, but not the only one.

As founder and former president of One Nation One Vote, a non-profit dedicated to fighting gerrymandering and overhauling the electoral-college system, Nelson shares our vision of a fair and functional democracy. A lawyer, UT professor, and former clerk for Supreme Court Justice Sandra Day O’Connor, Nelson also brings serious bona fides to an office sorely lacking adult supervision.

Nelson has committed to rescinding Texas’s lawsuit to end DACA on his first day in office. He calls the separation of families on our border a “humanitarian crisis,” and will finally bring the regulatory power of the state of Texas to bear on the actions of ICE, CBP, and their contractors.

As we write this, Texas—led by Ken Paxton—and 19 other states are going to federal court in an effort to end health care protections for millions of people, including the 130 million Americans with pre-existing conditions. The single most popular provision of the ACA, with broad support across the political spectrum, and Ken Paxton wants to take those protections away from us. Justin Nelson is committed to protecting health care for all Texans, fighting for protections for patients with pre-existing conditions, supporting women’s health, and fighting health care discrimination of all types.

Unlike his opponent, who is awash in personal and systemic political corruption, Justin Nelson is committed to combating public corruption, first by shining a light on the money that pervades Texas politics. Nelson has promised to defend the Texas Ethics Commission from several lawsuits intended to weaken its ability to regulate campaign finance. Paxton may refuse to fight these suits brought by his donors, but Justin Nelson believes that the government of the state of Texas should serve the people of Texas, not the highest bidder. He’ll fight to make sure we have a government we can trust.

We are pleased to endorse Justin Nelson. Texans deserve an Attorney General who will put their needs first, instead of protecting corporate interests and political patrons—or facing jail time.