Follow the 2-step strategy to win the Supreme Court fight.

Justice Kennedy’s retirement is a gut punch. Settled rights like abortion, marriage equality, and health care back under threat. There is a narrow path to victory, but it’s going to require levels of resistance not seen since last year’s ACA fight—perhaps even more.

There are 49 Democratic Senators. We need every single one of them to vote “no” on whoever Trump’s nominee is. Tell your friends and family in states with Democratic senators to apply maximum pressure: Especially in New York (where Charles Schumer is leader of the Democratic caucus), West Virginia, North Dakota, and Indiana.

We also need at least two Republican Senators. If have friends and family in Alaska or Maine, it’s time to activate them to call Senators Murkowski and Collins.

Our Senators in Texas are hard cases. But they still need to hear from you. Tie up their phones. Disrupt their workday. Make them feel the wrath of their constituents. Tell them that the people on Trump’s list are way outside the mainstream and not choices that their constituents want. McConnell doesn’t care, but you’re welcome to point out the hypocrisy of the so-called “McConnell Rule,” which prevented Obama nominee Merrick Garland from being considered during an election year.

Step Two: Take back the Senate

While our current Senators are immovable on most issues, Texas is one of the few states with a competitive Senate race in 2018. And we don’t need to tell you that Ted Cruz has got to go.

Beto O’Rourke is within five points of dethroning Lyin’ Ted, and we encourage everyone to support his campaign. With the retirement of Justice Kennedy, the stakes in this election just got even higher.  If we do the work now—if we phone bank, knock on doors, and send texts to voters—we can retake the Senate and stop confirmations of bad judges for the rest of Trump’s term.

Read more from Indivisible.org on the 2-Step Strategy to Win the Supreme Court Fight >>

On June 26th, a federal judge in California issued a preliminary injunction on the family separation crisis. Under the injunction, the government MUST reunite parents who are currently in ICE custody with their separated children and allow communication with between parents and children within 10 days. This is good news.

Several organizations are stepping up to reunite families:

RAICES Texas launched a portal and hotline for legal service providers to find parents of separated kids. You may have already contributed to RAICES after their fundraising campaign went viral, but here’s why you can still feel good about giving them money.

ProPublica is gathering facts about immigrant children being held by our government, and you can help connect children and parents.

Torn Apart is a rich data visualization resource showing locations of ICE detention facilities across the country and loads of other info. It is a result of intense collaboration between xpMethod and Borderlands Archives Cartography.

Sign the Grassroots Leadership petition to free mothers at T. Don Hutto & reunite them with their children immediately! On Thursday, June 28, there was an order handed down by officials “higher up” in ICE to deny bond to all mothers separated from their children, keeping them detained indefinitely. And while you’re at it, feel free to donate to their bond and defense fund to free detained mothers.

Join the Austin Sanctuary Network Accompaniment Ministry to offer rides to local immigrants as they make the road trip from Austin to San Antonio for Immigration Court Hearings, ICE check-ins or monthly ankle monitor checks. Use your privilege to show support for community members and witness firsthand the out-of-control, for-profit immigration system. To sign up or for more info email insideamigos@austinuu.org.

Indivisible Rosedale Huddle has a float in the annual Promenade Around the Park.

The annual July 4th Promenade Around the Park begins at the NW corner of Ramsey Park at 10am. At 9:30am, neighborhood children and guests are invited to come to the park and decorate their bikes and wagons with streamers before the the promenade begins.

See the Wimberley Indivisible float in the 4th of July parade. They’ll be handing out fans, flags, popsicles and 1000 origami cranes! Roads close at 9am in Wimberley, so it’s critical you arrive on time. Parade starts at 10 a.m.

Sen. John Cornyn can’t catch a break. Nor does he deserve one.

Poor, hangdog John Cornyn. The far-right has been attacking him for not being Trumpy enough. But progressives know that John Cornyn’s occasional appearance of reasonableness it an illusion.

Here is John Cornyn lying about Trump’s Zero Tolerance policy at the border:

My Democratic friends argue that crisis at border is new, as a result of new zero tolerance policy. Not true. Their proposal is zero enforcement. Dangerous. https://t.co/gSlH8V9jWi

Under Trump’s new policy, children who arrive with a parent are being designated “unaccompanied,” and separated from their parents. This is the part that is new and which created the current crisis. John Cornyn knows this, but chooses to lie about it.

For sheer venality and spinelessness, Sen. John Cornyn earns our condemnation this week. 2020 is right around the corner, Big John. We’ll be ready.

“The rally, called Families Belong Together, was one of more than 700 taking place across the country on Saturday, with an anchor event planned in Lafayette Square in Washington D.C.” 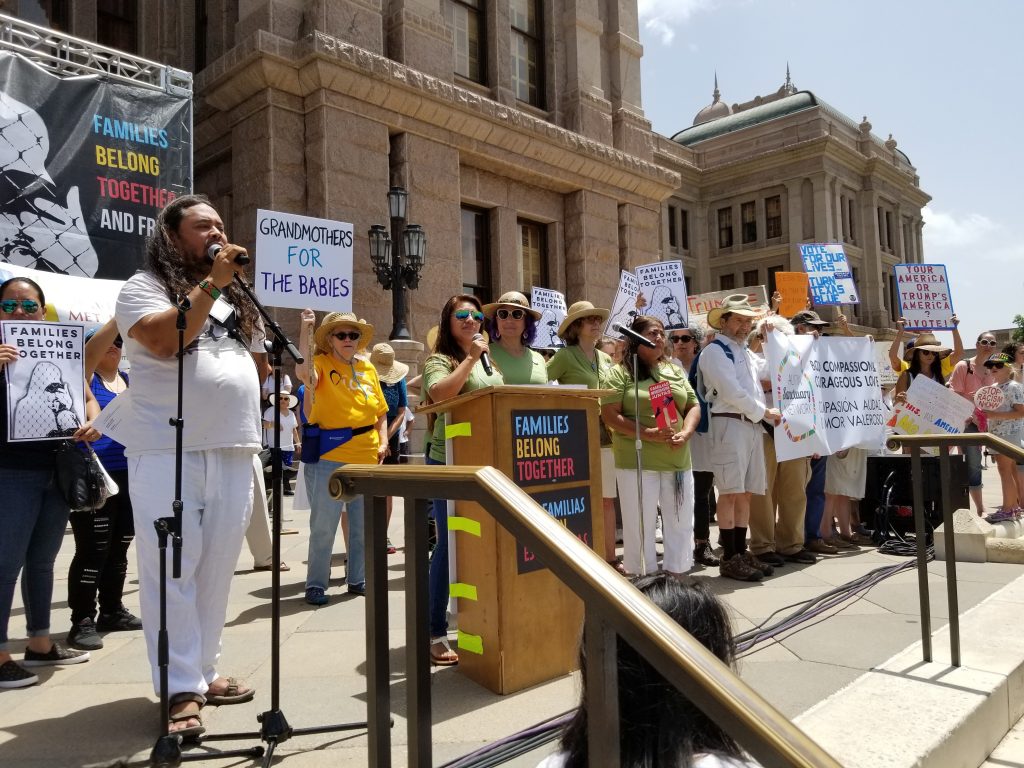 Families Belong Together and Free Rally organizers estimate that over 15,000 people attended the rally despite the sweltering summer weather. If you attended the rally, don’t stop there: continue fighting for dignity and justice for immigrants by taking the actions we’ve outlined above and support local organizations fighting for immigrants and providing much-needed services.

If you’re anything like us, the past days have been the most challenging yet of this administration. It’s more important than ever for us to latch onto those things that keep us going. So, this week we bring you both sagacity and sweetness. First, click through for Ada Limón’s poem, Instructions on Not Giving Up. Next, check out this dad’s laundry-basket roller coaster:

We have 127 days to change the course of our nation. 127 days to prove that we won’t allow Trump and his Republican party to corrupt the values that are at the core of what America aspires to be. 127 days to stop them from rigging every part of the economy to benefit them and their donors at the expense of every other American. 127 days until the election.

Support Indivisible Austin at this critical moment in the fight to stop the Trump agenda and move us all forward to a more just nation.