The Resistance Choir of South Central Texas was the brainchild of TX21 Indivisible activist Cat Yuracka, who in April 2017 pulled together like-minded, “more enthusiastic than talented” activists to partake in the joy of communal singing. Since then, the Choir has brought traditional and contemporary protest songs, songs of social justice and “revolutionary snark” to meetings, marches, rallies, protests, candidate forums, parades, private parties, and one ill-conceived Special Session of the Texas Legislature. 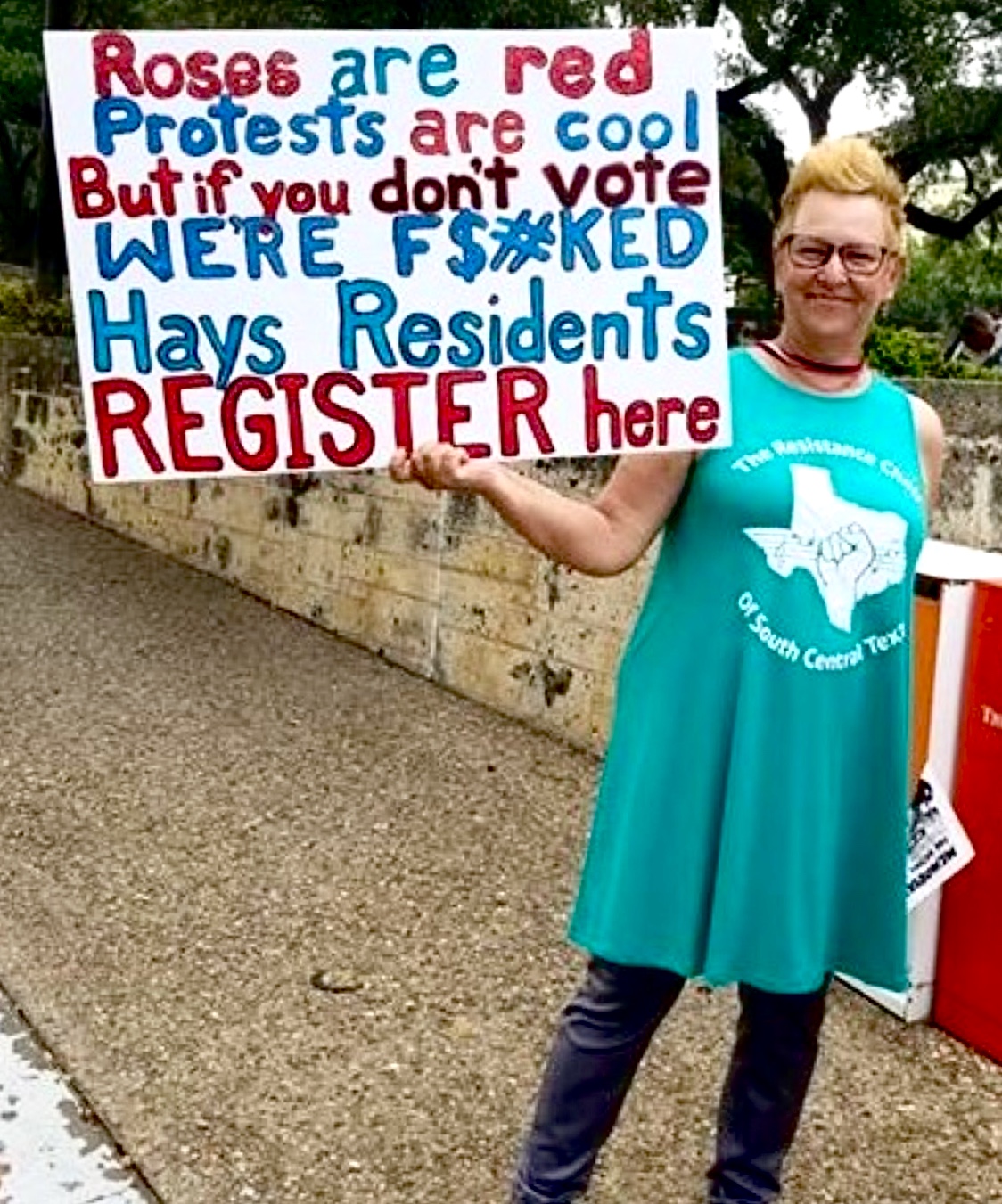 Cat’s “practice at home” method allows anyone with a desire to sing to learn songs on their own time, with biweekly rehearsals to “file off the rough edges.” From the choir’s Facebook page:

Our rare in-person hours designed to work out the rough spots in compositions still tend to vacillate between focused rehearsals and gab sessions, depending on whether or not deadlines are looming… We strive first & foremost to create a safe space where individuals rich in diversity of age, lifestyle, heritage, life experience, musical experience & talent can decompress for a couple hours a month together and encourage each other to bring their unique gifts to the forefront.

Cat’s dream is to franchise her model to other cities: So any budding choir directors reading this should get in touch (resistancechoirtexas@gmail.com). 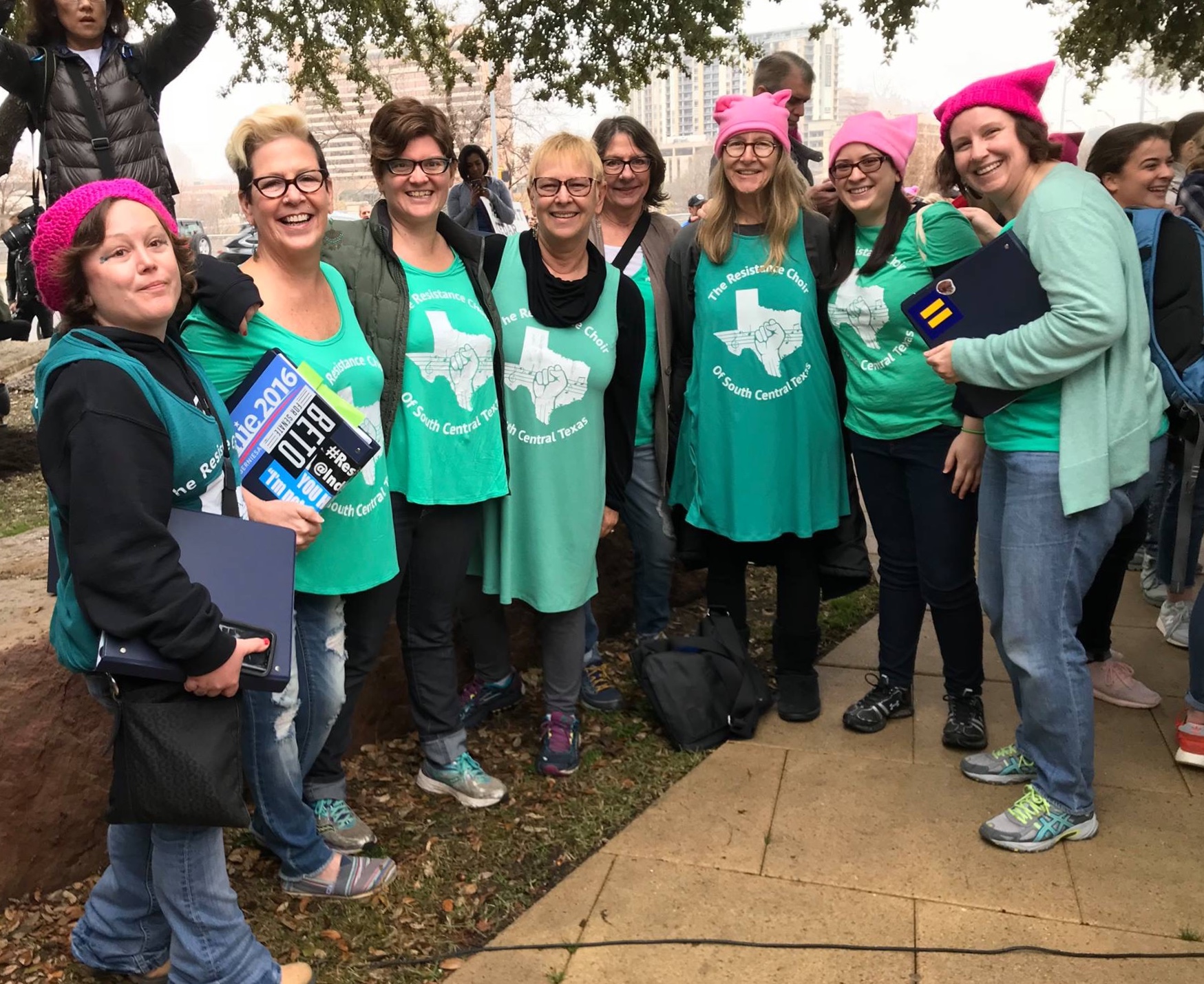 I came out of my post-election coma to find my world on fire over all things Trumpellian. As a survivor of childhood rape, I felt that I was more aware than most folks of the danger we were now facing, having ignorantly given a serial predator this kind of power. At the time, I was pretty incapacitated by an Access Hollywood-tape/election-debacle-induced PTSD meltdown, but I knew as soon as I recovered I would need to throw myself headlong into the fight.

I was painfully aware that my daughter and granddaughter’s futures were endangered from the misogynistic fallout of the election, not to mention all the marginalized groups under attack due to his racism and ignorance. Having been an abused kid who no one stepped in to “save,” I have always found it next to impossible to stand by and watch someone being abused without intervening.

I found the Indivisible Guide thanks to Rachel Maddow sometime after the election and became a member of TX21 Indivisible on January 19, 2017.  I literally came back to life by attending the Women’s March in Austin on January 21, 2017, and thanks to the TX21 Indivisible leadership, education and camaraderie, my metamorphosis from full-time gardener to full-time political activist was complete when I shut down my estate gardening business in spring 2017. 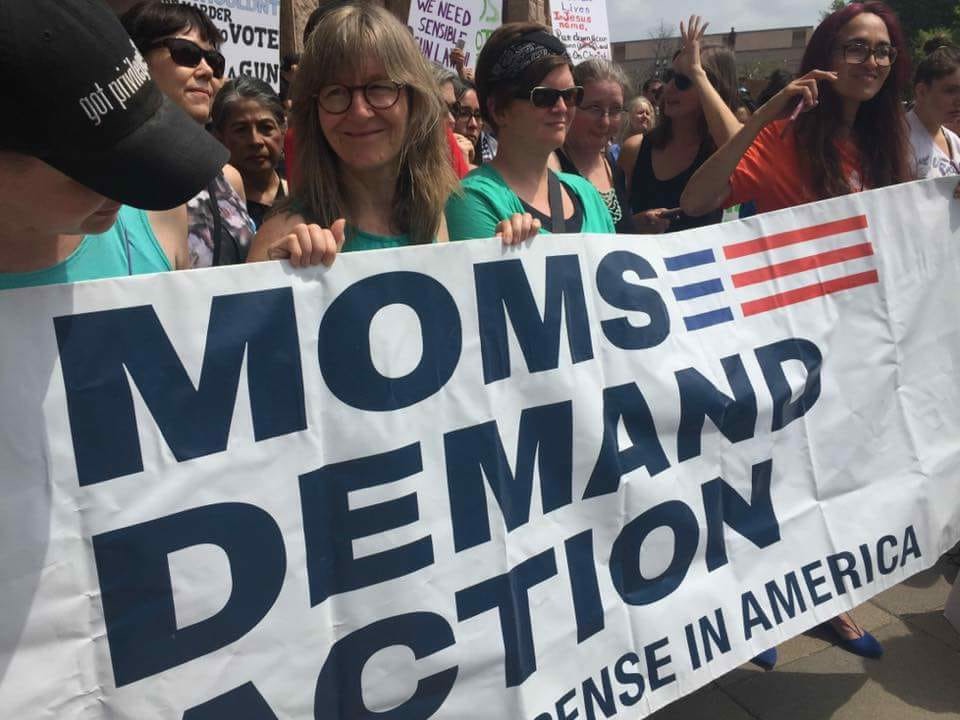 Well…that would have to be removing the pedophilic (probably incestuous), malignantly narcissistic, treasonous, Mafioso-inspired rapist from the Presidency. With my lifelong issues of child protection advocacy, responsible gun ownership legislation and women’s rights now coming in a close 2nd, 3rd and 4th.

Assuming you are not a paid protester, what is your day job?

Retired, thank God. I’ve been trying to come up with an angle to use home business tax deductions to alleviate a bit of the cost of The Resistance…but so far, I got nuthin’.

What advice do you have for people who want to get involved? 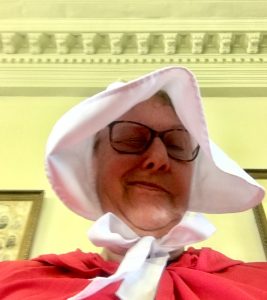 Plug into your local Indivisible. Hang out with and read the works of people who are more knowledgeable and experienced than you are. Stay up-to-date as best you can, but resist the temptation to think you can fight on every front. Pick a couple of areas and become disciplined about making them your focus. Remember to breathe: The Resistance is a choir piece, not a solo. Take advantage of the fact that others will cover while you take a quick breath. And strive for some kind of balance…it’s never worked for me, but folks I respect swear by it!

Is there anything else you would like to add?

The Resistance Choir of South Central Texas was literally a spin-off from TX21 Indivisible that has since tried to run hand-in-hand with the Central Texas Indivisible movement. Although we have been honored with invites to sing from other groups and individuals, the folks of Indivisible are our family and we do our best to support their Calls to Action whenever they are brought to our attention.

Also, my original vision had Choir Directors in each city who would manage their individual branches and then work together to improvise and record harmonies, coordinate the focus of practices and serve as our “solid core” for stage performances.

(If you are interested in leading or joining a choir in Austin, San Antonio, San Marcos, or Kerrville, contact Cat at resistancechoirtexas@gmail.com.)