Town Hall for Our Lives

Last week Parkland student David Hogg called for town halls on gun safety in every Congressional district next weekend. We are fortunate to have at least one member of Congress in the Austin area (so far) who has answered the call—Rep. Lloyd Doggett (TX-35). Many groups, including student-led groups, have come together to co-host this community-organized town hall. Please save the date for the afternoon of April 8, and we’ll share details on our website, via email, and on Facebook as soon as the location is confirmed.

Ted Cruz is in Austin: Show Up and Get Loud

Senator Cruz is campaigning at the Mailroom in Austin, minutes away from where he can land his private jet. We’re joining Indivisible Rosedale Huddle to make some noise and try to get a rare glimpse of our jetsetting junior lawmaker. The fun times begin at 6:30 p.m. on Tuesday, April 3. More info is on our website and on Facebook.

Call To Action: NO on Matthew Kacsmaryk

Matthew Kacsmaryk is an extremist judicial nominee even by Trump’s standards. Kacsmaryk is among a group of “zombie nominees” that Trump keeps sending back to the Senate even after their initial nominations expire. His nomination has been sitting on the Senate floor waiting for a final vote. It can happen at any time. Learn more about Kacsmaryk’s extreme views against LGBTQ rights here, and make calls to Sens. Cornyn and Cruz to oppose his nomination.

The Austin Sanctuary Network (ASN) is a coalition of faith communities, immigrants and other community members of civil society and organizations in and around Austin, Texas, that support immigrants fleeing violence or in danger of deportation, particularly undocumented immigrants who are being held unjustly and denied asylum status. ASN demands an immediate stop to raids and for-profit detention, an end to all deportations and updated immigration laws that are just, fair and humane. ASN seeks to create a community to provide physical sanctuary for immigrants who have exhausted their legal options and face deportation and offer companionship by giving rides to immigrant friends reporting to immigration court hearings, ankle monitor check-ins and other places in an effort to gain more pathways to safety for our neighbors. Indivisible Austin is a member of the Austin Sanctuary Network, and a sponsor of the ASN Benefit on April 20 (tickets still available!). 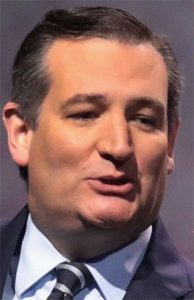 This week, Ted Cruz is making 12 campaign stops over three days in cities all across Texas, from Tyler to Midland. How is that possible? It’s easy when you have a private jet and schedule your campaign events near out-of-the-way executive airfields.

And on Tuesday night, when your pets start acting weird, or you feel a sudden chill, or smell a hint of ozone in the air–that means Ted Cruz has landed in Austin. Do we have a plan to show up and get loud? Of course we do.

4. My private jet broke down, and I had to fly commercial. Did you know what the TSA does to you now? Wow! #DuckingDewTop10 #txsen

Last week, Rep. Roger Williams spoke  in Austin at a private, Koch Brothers event and had the audacity to call it a public Town Hall. When ticketholdng TX-25 constituents from East Austin appeared, they were turned away.

Charlie the hippopotamus was rescued by a rhinoceros orphanage, becoming inseparable friends with Makhosi and thinking he was also a rhino. See their friendship and how Charlie learns to be a hippo!