Help sort and deliver postcards collected at March for Our Lives 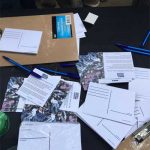 We succeeded in collecting 1,000+ postcards at the Austin march, calling on lawmakers to pass three commonsense gun laws! Now we need help looking up addresses, sorting the cards into Congressional districts, delivering the cards, and organizing visits to local offices during the recess (this week and next). If you can help with ANY of these needs, please email us at volunteers@indivisibleaustin.com.

The national Indivisible team has launched a process to endorse candidates and YOU can vote in it! Beto O’Rourke has cleared the national group’s initial hurdles to gain an endorsement (including nomination by local groups). To be able to vote on his (or any) endorsement when the time comes, you need to register to vote HERE by 11:59 PM Tuesday, March 27.

Make calls to Senators on upcoming nominations of Pompeo and Haspel

From Indivisible national: MoCs might be on recess, but that doesn’t mean that they’re not already thinking about their return. Right after recess, we’ll see both the nominations of Gina Haspel (explainer here) and Mike Pompeo (explainer here) come to the senate and we can stop these nominations in their tracks if we start working early. You can make call now to tell Sens. Cornyn and Cruz to reject them.

Action Spotlight: March for Our Lives

A note on calling/visiting/writing to our current members of Congress: 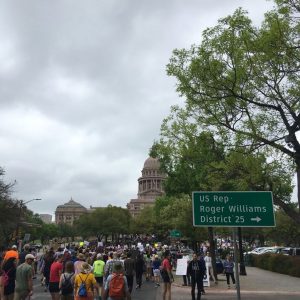 At the March for Our Lives we had the pleasure of chatting with hundreds of Texans who shared their hopes for stronger, commonsense gun laws. They also shared their frustrations with many of our current members of Congress and the feeling that our calls, visits, letters, and postcards are an exercise in futility. We can’t deny that it feels that way sometimes. But we also know that if we make the calls and visits or send the letters, then each time a representative or Senator says “I’m just voting my district” or “There’s no public will to change gun laws” or something similar we can accurately say they’re lying.

Our movement successfully wore Congress down on ACA repeal and massive cuts to Medicaid. They now know that health care is the number one thing voters care about, and they’re pretty afraid to mess with it again. Let’s keep following the lead of these brave students on the issue of commonsense gun laws. We have two things we can do: 1) show up and hold members accountable for taking dirty gun lobby money while letting our kids die, and 2) work to change the face of power and elect new representatives who aren’t in the pocket of the NRA.

Roger Williams: A “God-fearing father and grandfather” who is super into lying to women

These centers, which pose as comprehensive reproductive health care organizations, oppose birth control and abortion care and are a powerful part of the anti-choice movement. They are willing to lie to women about the status of their pregnancies, make wildly inaccurate medical claims, and will resort to straight-up harassment if they don’t feel like they’ve “converted” a client to their way of thinking. Disregarding the importance of a woman receiving high-quality care early in pregnancy, fake women’s health centers prioritize their political agenda over the health of women.

Roger, on the day of oral arguments, tweeted his support for these fake centers. (Because of course he did.)

Here in Texas, fake centers that receive tens of millions of dollars from the state outnumber comprehensive clinics 9 to 1. If the Supreme Court rules on the side of the centers, the consequences could be catastrophic for women across the country.

Read more about the case here and here.

As a God-fearing father and grandfather, I have always believed that life begins at the moment of conception. As a steadfast pro-life supporter, I will continue advocating for the rights of the unborn and the centers that fight for them https://t.co/tX5XVASRMW

Humans weren’t the only protesters at Saturday’s March for Our Lives: dogs came out, too. This movement has everything, even miniature horses!