Read how your voices made a difference last week >>

Most importantly: Donald Trump and the GOP-controlled Congress have failed to enact a single piece of harmful, major legislation.

It’s also thanks to you that Indivisible Austin has grown from a lowly Twitter account to a coalition of Texans representing thousands of members who are committed to defending Democracy and opposing authoritarianism.

DMs are open if you want to join the Resistance. 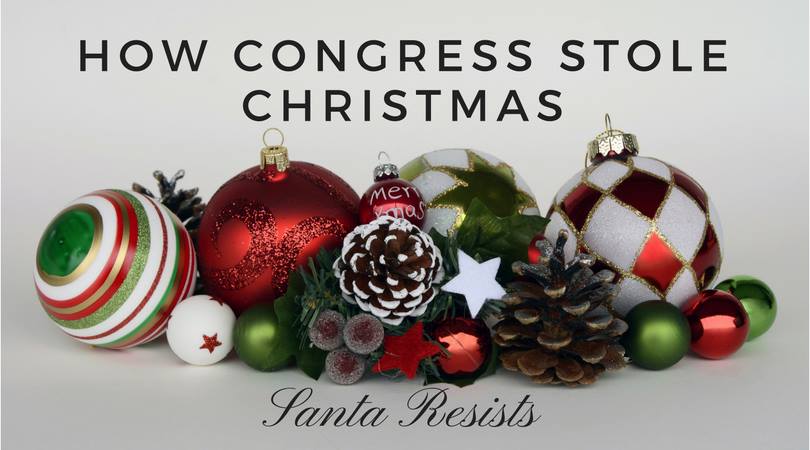 We’ll kick off at 3 p.m. outside Sen. Cruz’s office, and then take video of participants telling why their senator gets a lump of coal in his stocking.

When the stocking is full, Santa and his elves will present it to Sen. Cruz’s staff, and then we’ll carol our way six blocks to Sen. Cornyn’s office by about 3:45 for the same (program, video, Santa visit).

We plan to end at 4:30 with some closing thoughts about this year of resistance

And… come to our Holiday Party on Wednesday!

As always, Find the contact information for your elected officials here: Who represents me?

Government Funding: The government runs out of funding on December 22. Instead of passing a comprehensive bill to fund the government through next year before that date, it appears likely Congress will again kick the can down the road and pass a short-term funding bill next Thursday or Friday–but that is far from clear.

While Democrats have stated their goal is to include DREAM and CHIP funding (more actions on those below) in any funding, it remains to be seen if many members of Congress are willing to stand by that pledge.

Tell Members of Congress to Vote No on Tax Scheme

Late Friday, Republicans released their conference report of the tax scam bill. Despite some small changes, the tax scam is a giveaway to the wealthy while taking away from working families.

The House is set to vote on Tuesday, with the Senate following the day after.

Call your Representative along with Senators Cornyn and Cruz and tell them Texans won’t forget that a “yes” vote on the tax bill is a vote against Texas’s families.

It is unconscionable that Congress would let health insurance expire for children and pregnant mothers. CHIP once had broad, bipartisan support, and the only reason it hasn’t been funded is because of Congress’s ineptitude, and its zeal for repealing the ACA. Call your MoCs in both the House and Senate and tell them to fund the CHIP program before more Texas children and pregnant women lose coverage.

Recently, Sen. John Cornyn introduced the SECURE Act, which purports to be a solution for DREAMers. It’s not. (Read the statement on the SECURE Act from United We Dream.)

There are 138,440 DACA recipients in Texas alone, and each year they contribute $313,095,000 in state and local taxes. It’s up to your members of Congress to stand up to secure the futures of all DREAMers with a legislative fix: The DREAM Act.

Tell Cornyn and Cruz to end the uncertainty and pass a clean DREAM Act now.

On Friday night, Sen. John Cornyn hinted that he would be comfortable with the firing of Robert Mueller. He later clarified that he thinks Mueller needs to “clean house of partisans.” This kind dog whistling makes clear that the Mueller investigation needs legislative protection. Bills from both Democratic and GOP Senators have been drafted but blocked.

Call your Senators (especially Cornyn) and House representatives. Tell them that you support the Mueller investigation, wherever the facts lead, and that it must be protected by Congress.

Read more on our blog: “What to do if Mueller is fired” >>

As expected, the FCC voted to to repeal net neutrality. Now only Congress can prevent corporations from throttling the Resistance. Call your reps and demand that they enshrine rules against blocking and throttling and deny the FCC a blank check over the internet.

U.S. Senator John Cornyn refuses to vote for a clean Dream Act — it might be because his heart is two sizes too small! Join DREAMers and allies as we come together outside Sen. Cornyn’s office to celebrate our dreams and tell our stories. Our hope is that Sen. Cornyn’s heart grows three sizes more, and that he votes for a clean #DreamActNow.