Read how your voices made a difference last week >> 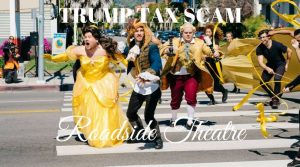 Thanksgiving may be over, but the tax bill is still a turkey!

Come on out at noon for a creative action to protest this tax bill at Sen. Cornyn’s office. This bill puts money in the pockets of the wealthy and corporations at the expense of everyday working folks. Oh, and it repeals a chunk of the ACA, too!

Stick around to visit Senator Cornyn’s staff to tell him to vote NO on the tax bill, or just show up and be counted.

The Indivisible phone bank to stop the tax scam is live again! Starting Monday morning, we’re asking you to make calls to constituents with moveable senators who are potential swing votes on this heinous tax bill.

It’s easy, and you can call from anywhere. Can you commit to making 15 calls to remind people to call their senators and urge them not to vote for the tax bill?

Last week, the Trump administration announced that it would not renew the Temporary Protected Status (TPS) for 60,000 Haitians–giving them 18 months to return to Haiti. TPS provides protection to immigrants already in the US whose country of origin is unsafe. Haiti is the latest of several countries for which Trump has overturned TPS.

In addition to calls for a clean DREAM Act, which would protect the DACA recipients who came here as children, there is also the SECURE Act, which protects TPS recipients and puts them on a path to citizenship. Trump’s needless and cruel rollback of TPS is a reminder to all of us to call our MoCs to demand protections for immigrants whose safety is at risk.

Get scripts on the DREAM and SECURE Acts >>

Read about Haitian immigrants fleeing the US for Canada >>

Contact the FCC and your MoCs about Net Neutrality

The debate over Net Neutrality can sound like a “first world problem” compared to life-or-death issues like DACA and healthcare. Here’s are two reasons why it matters:

The FCC is scheduled to make their final decision on December 14. Contact them now, and also call Cornyn, Cruz, and your House rep to let them know that without Net Neutrality, our Democracy suffers.

Read more about Cornyn and Cruz’s Stance on Net Neutrality >>

Austin City Council is set to vote December 7th on the unjust police union contract negotiated between the union (Austin Police Association) and the City. Our friends at Austin Justice Coalition and Just Liberty are calling on you to act: now is the most important time for you to contact your Council Member and voice the need to end the contract! The importance of calling and emailing your Council Member cannot be understated.

Events to attend and promote in your community:

Stick around to visit Senator Cornyn’s staff to tell him to vote NO on the tax bill, or just show up and be counted.

11:30 a.m. to 1 p.m. Stop Tax Scam In-Person Phone Bank, Texas AFL-CIO, 1106 Lavaca St #200. Phone bank is on both Wednesday and Thursday. There is no parking onsite; there may be street parking nearby. The Capitol Visitors Garage is a .5 mile walk, but it’s free for 2 hours.

11:30 a.m. to 1 p.m. Stop Tax Scam In-Person Phone Bank, Texas AFL-CIO, 1106 Lavaca St #200. Phone bank is on both Wednesday and Thursday. There is no parking onsite; there may be street parking nearby. The Capitol Visitors Garage is a .5 mile walk, but it’s free for 2 hours.

4 to 6:30 p.m. 3rd Third Stakeholder Meeting on Paid Sick Days, Fiesta Gardens Building, 2101 Jesse E. Segovia St. This is the last of the three stakeholder meetings hosted by the City of Austin to gain public feedback on a potential city-wide paid sick days policy. Work Strong Austin, business owners, and community members will continue discussing the kind of sick days policy that Austin workers and employers would most benefit from. Can’t make it? Share your input with the City of Austin by making an account and submitting your comments to http://bit.ly/paidsickdaysnow, or texting AUSTIN to 5126435627!