Have you checked out Congressman Michael McCaul’s Twitter feed and Facebook postings this week? Well, he’s on recess and back in Texas meeting with constituents, holding town halls, shaking hands, and kissing babies! Just kidding!! He’s making the rounds, but not with regular, everyday constituents. His stops are all highly orchestrated, under the radar, closed meetings, photo ops, and fundraisers. 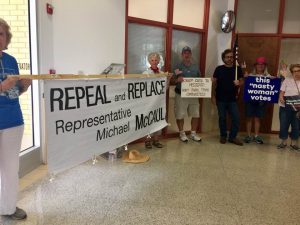 He was at the Katy Fire Department on Aug 8th, posing with a nice shiny red fire truck in the back ground. Apparently, Katy is “a recipient of the SAFER Grant!” Yay! Go Katy! There are photos of his visits with the American Jewish Committee Houston Region, an un-named group in Prairie View. A visit to Harris County OHSEM, Homeland Security and Emergency Management, and then a stop in Fayette County to pose with the Sheriff’s Office and K-9 Unit. One photo op that’s missing is his stop in Bastrop.

Thursday August 1oth, McCaul had a visit planned in Smithville to meet with County Judge, Paul Pape, and other local elected officials and city managers. We hear the visit was to discuss recent disaster relief efforts from the fires and floods that have ravaged Bastrop County over the last few years. This meeting was changed at the last minute and moved to the Bastrop County Courthouse Annex in Bastrop and was to take place in the Commissioners Courtroom. 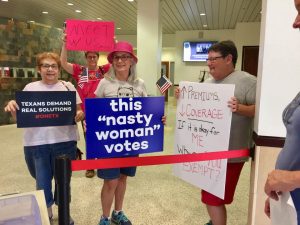 When we got wind of the venue change we alerted the local newspaper to the planned meeting being hosted by Judge Pape and they called him to confirm the new location and time. The reporter was told this was a private meeting. The public and the press were not invited. The reporter asked if it was legal to hold a closed meeting in the County Commissioner’s Court. Pape’s office said they would check with the local District Attorney. The meeting ended up taking place in Judge Pape’s office. We are told Pape, McCaul, and the mayors and city managers of Smithville and Bastrop were in attendance.

McCaul also had a fundraiser scheduled Thursday evening in Bastrop at the private home of a local business owner. This event was highly insulated and planned by Lilly & Company, an Austin based political consulting, campaign strategist, and fundraising group. Check them out. Pretty impressive clientele. Only select people were emailed an invite. Once you purchased a ticket through the website, you would get the location and details of the event. 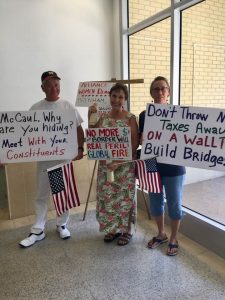 We patiently waited until the Courthouse closed for the day and they turned the lights out on us. They may as well have yelled out, “Last call for alcohol! You don’t have to go home, but you can’t stay here!” It’s a shame our Congressman is so scared to meet with a handful of citizens that he had to slip out the back door of the courthouse to avoid us. Sad!

What’s even more shameful, is our local elected officials were in on it.