We live in interesting, complex times – and a lot of it is due to the internet. Its power and reach is immense. We use it to organize, to get our message out, and to build movements.

But there are plenty of bad actors out there who want to use the internet’s power against us. In pop culture, you always see the bad guys using really complex code to break into computer systems and databases. In reality, hackers and other bad guys use more straightforward attempts at trickery:

Let’s take the second case here – honeypots. Far-right groups are now setting up websites and online petitions to trick antifa groups (that’s anti-fascist brigades, BTW) into divulging their personal information. This is part of a deliberate campaign being waged to help identify and unmask these people – mostly because antifa has been extremely effective at countering far-right activities. 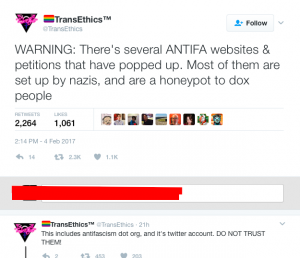 At first glance, these fake online petitions and sites look totally legitimate, down to the URL, which might be something like antifascism.org cited above. Everything about the design, web copy, and stated goals is meant to trick antifa members. Once a member of antifa logs in and signs the petition (often by providing their name and email address) they’ve now set themselves up for doxxing by the groups running the petition.

What is doxxing? It’s the repugnant practice of publishing someone’s information on the internet with the stated goal of harassing them. In the past, doxxing victims have had vital information published: names, home/work addresses, phone numbers, and social security numbers.

In this particular case, the far-right / neo-nazi groups want to doxx antifa to make them personally vulnerable and less effective in their actions.

Okay, so what’s the remedy here?