We know you know that Trump is dangerous. According to the New York Times, you tried to prod Trump to change the subject after he used an unhinged anecdote about a golf buddy to justify his lies, and now a possible Executive Order, on voter fraud:

“The anecdote, the aides said, was greeted with silence, and Mr. Trump was prodded to change the subject by Reince Priebus, the White House chief of staff, and Senator John Cornyn, Republican of Texas.”

Later, on MSNBC, you looked a little stunned and said Trump’s allegations about voter fraud were a “distraction” and a “rabbit trail.”

We agree with you on this!

Later that same night, you retweeted the Texas Tribune’s findings that not a single Texas member of Congress supports the border wall, at least not in full. 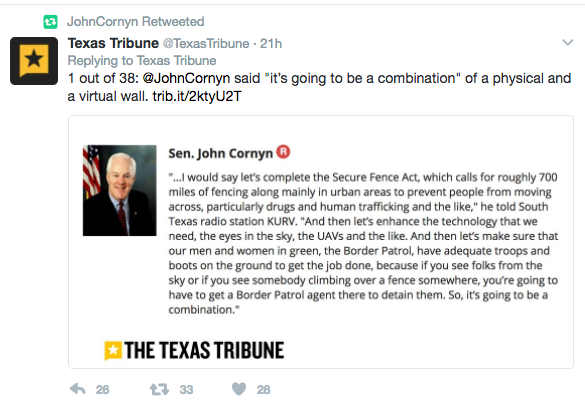 Why would you do that, except to send a signal that there is distance between you and Trump?

Let’s explore that distance. We have common ground. You seem like a decent man who wants to legislate. You don’t want a madman for president, and neither do we. Let’s work together to return civility to the political process, disagreeing — often intensely — on policy but not on our core values as Americans.

This is the first in a series.