Greetings from your Washington, DC correspondent for this week!  I traveled to Capitol Hill to hear our Texas Senators, Cornyn and Cruz, speak at the Jeff Sessions confirmation hearing on Wednesday.  It was an interesting experience, and I look forward to my next visit!

I arrived at the Russell Senate Office building at around 8:30 a.m.  When you walk into the building, you pass through a security checkpoint, which has the same basic setup as airport security (no water bottles allowed, etc.). 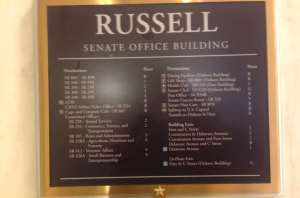 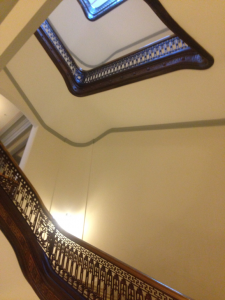 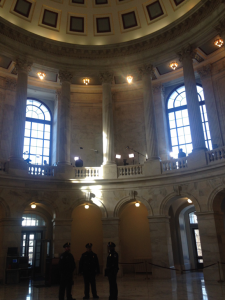 Shortly after 9:00, the line started moving up the stairs toward the room (SR325) where the hearing was being held.  The room was next door to Sessions’ Senate office.  Sessions was nowhere to be seen, though, as far as I could tell.  I may have just overlooked him, though, because there were a lot of white men with white hair in the general vicinity.  Also, Orrin Hatch is a dead ringer for Sessions, except that Hatch appeared to frequent the same orange tanning salon as Trump. 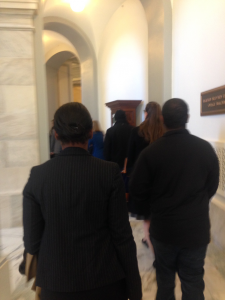 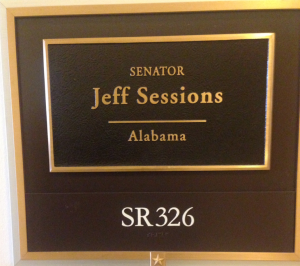 I took a seat in the back of the room and waited for the hearing to begin. 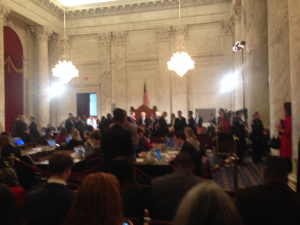 Some of my favorite testimony of the morning came from Oscar Vasquez.  He came to the US as a child and was an undocumented immigrant for years before he finally was able to become a citizen.  He is now a mechanical engineer who volunteers with high school robotics teams, and he also served in Afghanistan.  This guy is a perfect example of why our country is great already… and he’s a fellow Texan!!

The most bone-chilling moment of the morning for me came during the Q&A with former Attorney General Michael Mukasey.  He admitted that Trump’s pick for Attorney General would have the power to stop an FBI investigation into allegations that Trump and members of his campaign coordinated with Russia to interfere with our democracy.  Considering how active Sessions was in the Trump campaign, this was a particularly terrifying realization. 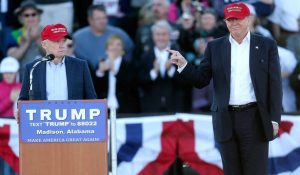 I’ll move on now to specifically talk about Senators Cornyn and Cruz.  Each senator had 7 minutes to speak or ask questions.  Senator Cornyn gave me a glimmer of hope because, instead of spending his 7 minutes snarkily attacking NAACP President Cornell Brooks or sparring with Al Franken like some of his colleagues, he spent his 7 minutes highlighting the importance of the 21st Century Cures Act, particularly with regard to the importance of not treating mentally ill people as criminals.  He also emphasized the importance of bipartisan cooperation.  Unfortunately, my dream that Cornyn would become an ally of the Resistance was short-lived, though, after viewing his twitter feed today:  “First sign of enhanced U.S.-Russia relations under Trump” and “The Climate Intelligence Agency:  Democratic CO2 obsessions reach new comic heights”.  Oh, well!  Next up was our other Texas Senator, Ted Cruz.  I actually had to leave for a bathroom break because Cruz’s demeanor totally stressed me out.  While Cornyn gave off a chillaxed/drinking a Lone Star vibe, Ted Cruz struck me as histrionic and hysterical (and not in the ha ha way).  Perhaps he should try a guided meditation class next time he’s in Austin.  I think he’s going to need to develop some strategies to calm down if he wants to make reasonable and rational decisions.

After hearing what our Senators had to say, I paid a visit to their DC offices.  First up was the office of Senator Ted Cruz, which was just upstairs from the hearing room.  My picture is a little shaky, which may or may not reflect my stress response to hearing Senator Cruz speak at the hearing. 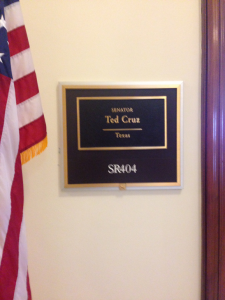 His staffers could not have been sweeter, and it was a pleasure to meet them.  They were young, bright people working hard and enjoying their time in D.C.  I mainly spoke to one young woman who was a fellow Texan.  She initially asked if I had a meeting with the Senator, and I explained that I was just visiting from Austin.  I told her some of my concerns, focusing on Tillerson, which was our Indivisible Austin action item of the day.

Next, I crossed over to the Hart Senate Office Building to visit Senator Cornyn’s office. 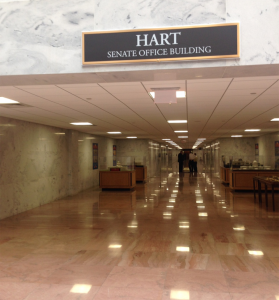 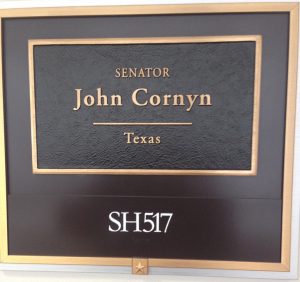 Again, his staffers were bright young people, and they were easy to engage in conversation.  I spoke about my concerns and asked why Senator Cornyn supports Tillerson’s nomination.  They told me that Senator Cornyn knows what kind of man Tillerson is.  I said, “What kind of man is that?”  “A good man”, she replied.  She also mentioned that he has experience with foreign dignitaries.  I greatly appreciated their time, but I remained unconvinced, as did many others who followed Tillerson’s hearing.  A strong candidate for Secretary of State must be qualified to deal with many other issues besides oil.  In any case, it was great to meet these staffers and to put faces to names.  I plan on talking to them many more times in the weeks and months to come!

Well, with that, I’ll sign off.  Have a great weekend everyone- rest up!!  We have a lot of work to do next week!!