Poll: When can you join our general body meetings?

No, the Texas Secretary of State did not say that thousands of people voted illegally 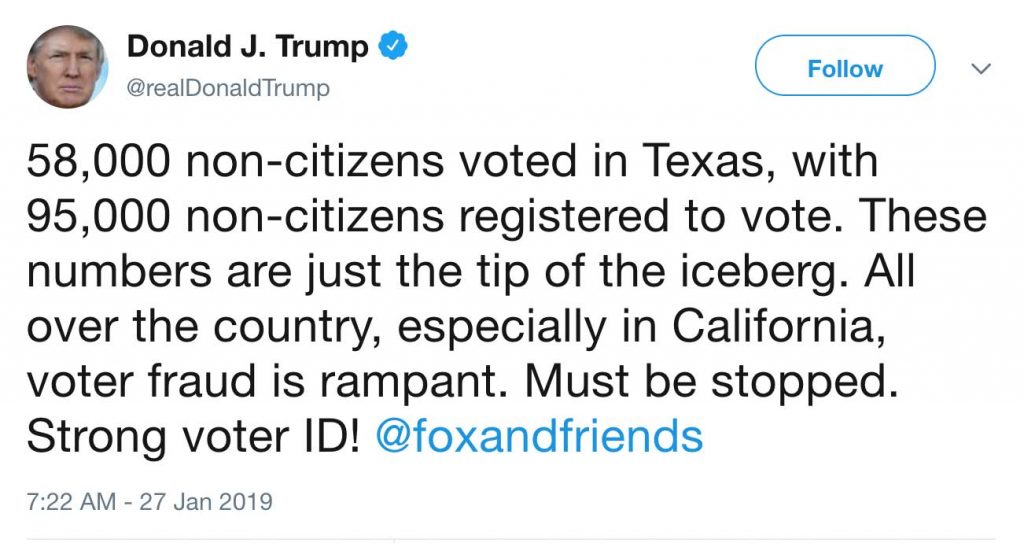 The Texas secretary of state’s office flagged 95,000 registered voters who the state says counties should consider checking to see whether they are U.S. citizens. This set off a firestorm of misinformation from Gov. Abbott, Ken Paxton, and even Donald Trump—along with some extremely lazy stenography in the media.

Unlike our governor and president, the Texas Tribune appears to be reporting this story with accuracy and an appropriate level of skepticism. Later, NBC News wrote a good piece on Trump’s misleading tweet and the underlying facts.

Other news outlets, including the Austin American-Statesman, fell short, with click-bait headlines that parroted Trump and Abbott’s zealous interpretation.

State Rep. Rafael Anchia further clarified that, because Texas drivers licenses are valid for many years, it’s no surprise that naturalized citizens, who regularly register to vote immediately after their citizenship ceremony and later vote, might be shown as non-citizens in the DPS database.

Actually, that’s not the takeaway. Nor is it about how far back SOS had to go to make this an “issue”. 50K Texans per year are naturalized. Most have DLs. (1x) #TXlege

Here’s what you can do:

Update: The Statesman changed their headline

Update: The headline on this story was revised to more accurately reflect state officials’ actions and findings.

Pressure works. Your calls and office visits to end the Trump Shutdown worked. Whether Big John was being entirely honest about call volume is another story, but here are two choice quotes from our senior senator, spaced eight days apart.

Jan. 16: “Not many, not many,” was his response to the Washington Post when asked how many constituent comments his staff is fielding.

Jan. 24: “We’re all hearing from our constituents who are working for no pay,” Cornyn said. “And there’s a parade of horribles of how people who are having to cope with not getting paid, and it’s not good.”

Now we need to let Cornyn know that Americans—including 35,000 federal workers in Texas—will not allow shutdowns to hold us hostage again.

Find out which committees your rep is on

See who represents you in the Texas House and Senate

Both chambers have a variety of committees with a variety of functions. There are three types of legislative committees—substantive, select, and procedural. These committees examine policy issues and generally determine whether or not a bill will get a vote on the floor.

Read our TXLEGE guide to learn more about why these assignments are so important.

The Twin Oaks Branch Library is excited to host a social justice book club! This new program series has been curated to encourage all community members to become well informed on critical issues of disparity, inequity, and difference. We hope to challenge the feelings of apathy and fear on important political issues through facilitated dialogue and a facts based approach to civic engagement.

.@JohnCornyn We are here and we are watching – end the shutdown now! With no money for a medieval wall! pic.twitter.com/OIepkGENx4

We called, visited and protested, and after 35 days Trump finally acknowledged the new reality. He can’t govern by tantrum anymore.

The government is open again and 800,000 workers are back on the job, at least for the next three weeks.

In the Trump era, the next big fight is always just around the corner, if it’s not already upon you. Indivisible Austin will help be there to lead the fight, but we REALLY DO NEED your support to be effective. Make your recurring gift today!